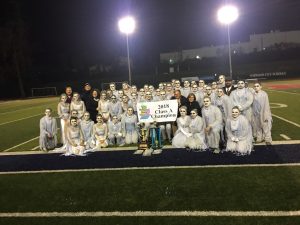 Mid-States Band Association (MSBA) held their “Class A” Championships in Norwood, Ohio this past weekend on November 3rd.  The Prelims competition began Saturday morning with 30 bands representing the states of Indiana, Kentucky, Michigan and Ohio working towards a spot in the finals competition that evening.  Kentucky had 19 bands represented in the class.  ‘

Hart County was proud to represent the school and community by bringing home First Place in the MSBA Class A Championship Finals Competition (Receiving a traveling trophy and a trophy to retain for the school) along with Plaques for Best Music, Best Visual, Best General Effect, and Best Color Guard.

SEASON FOR THE SPIRITS

The competition show for the 2018 Hart County Marching Raiders was “Are We Really Alone”.  Ed Johnson created the theme to tell the story about spirits rising up wondering around the mysterious graveyard searching for others.  Setting the scene were entry gate posts, tombstones, a crypt, and a mausoleum. Enhancing the mood of the darkened cemetery, the members of the band were dressed in spirit like costumes in pale greys and whites.

As the show began, the stage was empty with the soft sounds of wind blowing and crows calling when the crypt was opened with the daunting sounds of J.S. Bach’s Toccata and Fugue played by the trumpets then interrupted by a snare drum solo by Senior, Jacob Choate.  The fugue continued as the woodwinds and horns were featured followed by a tenor drum solo by Senior, Landon Brent.  Finishing the opening statement with a dark bold sound were the low brass and Sophomore keyboardist Kaylee Childress.

The pace picked up as the band took the theme from the movie “Beetlejuice” to an energetic level.  Senior piccolo soloist, Sydney Avery, soared above all as the woodwinds spookily danced around her on the crypt.  Throughout “Beetlejuice”, the spirits (Raider Band members) used a variety of non-traditional marching styles to create the ambiance of being inside a world not of our own.

The second musical selection was arranged from Radiohead’s re-recording of a song called “Creep”.  Moving to unchartered territory by the Marching Raiders, the song opened with an Electric Bass and Electric Guitar duet performed by Sophomores Logan Brent and Taylor Dennis and accompanied by the front mallet ensemble and low brass.  Then all of a sudden, the crypt is reopened to the mysterious sounds of Junior alto saxophone soloist, Will Carroll.  Continuing to pull at the heart strings of the audience as “Creep” comes to a full climax with musical intensity  before  softening to a sadden sound by the soloist.

Excitement took over when the trumpets burst through with a bold call as the band started the final selection “Haunted Carnival”.  Spirits were scattering all across the graveyard searching…searching for someone… anyone!  The drum break interrupted the frenzy with a creepy broken down carnival sound from the percussion section feature accompanied by the brass and woodwinds.

In a last attempt to find the answer to the question, “Are We Really Alone”, the music explodes with bursts of energy and fast paced drill movements driving the story home.  Finally, the spirits began to wander back to their homes as Will Carroll played the haunting melody from “Creep” as he is pulled into the mausoleum leaving the cemetery completely ALONE.