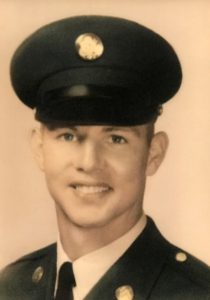 It is once again time to recognize our local veterans as we near the Veteran’s Day observance. The Butler County Chapter NSDAR holds an annual Veteran’s breakfast to honor those veterans. This year’s breakfast will be held in the Butler County High School commons area at 9:00 AM on Saturday morning, November 10 and all veterans are invited. Each year we select one veteran as our Veteran of the Year and this year we have selected Tommy Wood to be recognized. His interview follows.

In October l941, I was born the son of Walter and Mary Wood in Prentiss, in Ohio County, KY.  I was the fifth child of six children.  My Dad was an underground coal operator in Prentiss and as a child I would sit on the back of a punching machine while he was operating it in the mines.  As I grew older, I worked in and around the mines during the summer, after school; and on the weekends.  My Dad was killed in the mines just as I was getting ready to graduate from high school.  After graduation, I went to Louisville, KY and worked in a grocery store, an upholstery shop, and an optical lab.

In February 1963, during the Vietnam Era, I went to serve My Country in the Army Reserves.  I took my basic training at Fort Knox and was stationed there for the remaining six months training.  I served as a Company Clerk. I had to go to Monthly Meetings in Central City, KY and two weeks of Summer Camp in Fort Jackson, South Carolina.  We were always aware that we could be called to active duty at any time.

When I was on 2 week leave after Basic Training in June 1963, I married my sweetheart, Linda Shultz. We have three sons, David, Steven and Walter (Leslie) and eight grandchildren.  After I returned home from completing the six months training at Fort Knox, I worked in the coal mines for my brother.  In 1964, I went to work for Chevron Oil Company and took my training in Bowling Green, KY.  After training, I operated two service stations in Beaver Dam, KY then in 1966, I got promoted to Retail Sales and the Company moved me and my family to Somerset, KY.  My Army Reserve Monthly Meetings were also transferred to Somerset.  My two weeks of Summer Camp continued to be in Fort Jackson, South Carolina. In l969 after completing my six years of service, I was honorably discharged as a Staff Sargent.

In September of 1970, I went into the business of an Underground Ground Coal Operation in Butler County as a partner with my brother.  I moved my family to Morgantown, KY in October, 1970.  In 1978, I sold my half of the Underground Mines and went into the Surface Mining Industry.  I then sold out and retired in l985. While living in Somerset, I was a member of the Jaycees and we did a lot of community service.  As a member of Morgantown First Baptist Church, I serve as a Deacon, Board member; and Treasurer of the Gasper River Association.

Butler County has several activities planned to recognize our Veterans. A few of those are the County-wide program at Butler County High on November 12, the parade on Saturday afternoon, November 10 followed by a reception in the Morgantown Elementary building. The local VFW Auxiliary for Post 5837 sponsors a dinner on that weekend. Watch for more details on those events and others that might occur.  THANK YOU TO ALL OUR VETERANS.