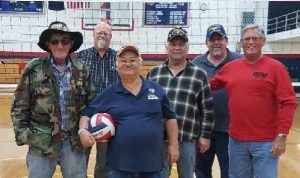 The Volley for Veterans Tournament was held Nov. 3.  Walden’s BBQ sponsored the competition.  Proceeds from the event will be given to local veterans.  The event had concessions for everyone that attended and the winners received a trophy, a free meal ticket and their picture taken to hang up in Walden’s BBQ.

The Kaori were the winners of the competition.