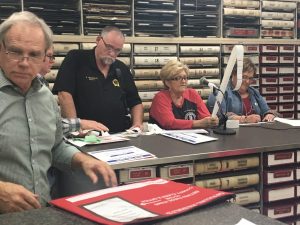 As the dust settled, it was clear that Monroe County voters were not in the mood for any last-minute upsets in the 2018 race. None were even possible at the county level or in the city races for Gamaliel and Fountain Run; all of those contests were decided at primary time in May, with candidates running unopposed.

Still, at least 4,229 Monroe residents came out to vote. Their choices, in brief:

Mayor of Tompkinsville- Scotty Turner, with 297 votes. William “Bud” Hoffman ran second, with 143 votes, followed by Frank Massengille with 108 votes, Jerry Hodges with 106, Danny Vinson with 98, and Steve Curtis with 68.

Tompkinsville City Commissioners Anita Hamilton Bartlett, with 512 votes, and Tenna Cain, with 368, will keep their seats and be joined by Beth Cross with 334.

Jim Stoops won as a write-in candidate for 3rd District Constable.  The position was won by Frank Massengille last May, but Massengille dropped out to try for mayor, leaving the constable’s job open for Stoops.

Kristi Castillo was the choice of both Monroe and Cumberland countires for the district  judge in the 60th judicial district. With all Monroe districts totalled, but not all of Cumberland, Castillo held a lead of 4406-2342 over her challenger, Tompkinsville city attorney Richard Jackson.