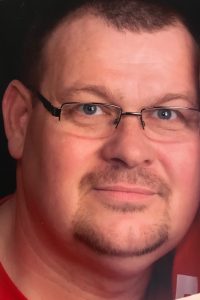 EDMONTON – Tommy Lee Grissom, age 54, was born August 28, 1964, in Glasgow, Kentucky to Raymond and Myrtie Olson Grissom. Tommy passed away Monday, October 29, 2018, at the Medical Center in Bowling Green after a lengthy illness.

Raised in Metcalfe County he attended Edmonton Elementary and Metcalfe County High School. Raised on a farm his junior year he got his first job at Big Y Cee Bee and worked for Bill Rush and Novella Hamilton for six and a half years. After the store was sold he got a job at Cavanah IGA owned by Dallas and Barbara Cavanah and remained there for almost ten years when the store was sold to Paul and Tana Shade. While continuing to work for Paul and Tana for the next ten years he got Meat Manager of Year in 2005.

Tommy was a member of the Edmonton Baptist Church and was very active in the church doing whatever he could do for the church and others. Tommy married Debbie Fields on August 12, 1988, at Bethlehem Baptist Church in Greensburg. At the time of his death, they had been married 30 years.

Tommy is survived by his wife, Debbie, three sons and daughter in laws: Jeremey and Anna Fields, Stephen and Tabitha Grissom, and Justin and Sarah Grissom all of Edmonton; his parents, Raymond and Myrtie Grissom of Edmonton; three brothers and sister in laws: Lonnie and Dee Grissom, Tony and Robin Grissom, and Billy Joe and Sasha Grissom all of Edmonton; five grandchildren: Zackary Wayne and Wyatt Lee Fields, Jonathan, Noah, and Peyton Grissom; special friends: Barbara Cavanah and Garland VanZant. A special Aunt, Mary Hall and a special niece, Riley Jo Grissom along with other nieces and nephews, aunts, uncles, and cousins.

Tommy was preceded in death by his only sister, Bonnie Grissom and his father and mother in law, Junior and Ethel Fields.

Tommy’s request was that in lieu of flowers donations be made to the family burial fund at Butler Funeral Home. Funeral services will be held 1:00 p.m. Friday, November 2, 2018, at Butler Funeral Home in Edmonton with burial in the Metcalfe County Memorial Gardens. Visitation will be from 3:00 p.m. until 8:00 p.m. Thursday and after 9:00 a.m. Friday at the funeral home.