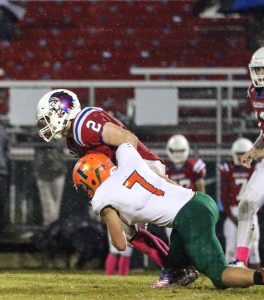 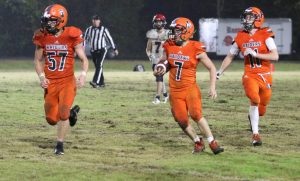 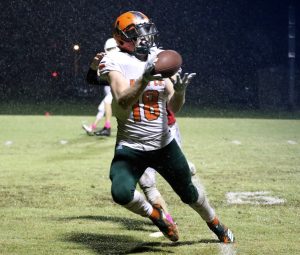 Senior, Anthony Neal on the reception against Adair. 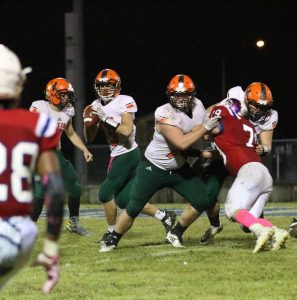 Senior, Keaton Trent blocks for Senior, John Shoulders as he prepares to make a pass.

The Raiders came from behind twice to win their 7th game of the season over Russell County, 23-13.  As I reported this would be the most wins ever for the Raiders. I was mistaken, Mike Cundiff’s team in 1988 went 8-3 to set the most wins ever for a Raider football team.  However there was not a play off format at that time.  Fridays win is 2nd best and first ever 7 win season.

The Raiders took the kick off to start the game but gave it right back to the Lakers as they intercepted a Raider pass on their own 48 yard line.

They drove the ball to the Raider 15 yard line.  The Lakers tried a field goal but it went wide and the Raiders started on their own 20 yard line.

The Raiders got to the their 47 yard line when a mishandle gave it back to the Lakers.  After a Dustin Butler sack of the QB Logan Campbell tipped the next pass and Zack Bradley grabbed the ball for the Raiders.  The Raiders drove the ball to the Laker 3 yard and stalled.  The field goal attempt by the Raiders went left to keep the at 0-0 to end the quarter.

The Raider defense forced Russell County to punt.  The Raiders stated this drove on their own 35 yard line.  The drive was stopped on the Raider

37 yard line.  Russell County took advantage and scored with 3 minutes left in the half to take the lead 7-0.  The Lakers tried an on side kick but the Raiders were ready and started this drive on their own 43 yard line.  Tyler Rutledge got the 1st carry to the 47 yard line.  Dustin Butler got the next 3 calls and scored from the 3 yard line with 1:05 left in the half.  Ethan Chenoweth nailed the extra point to tie the score.

Russell County took the kick off and ran right up the middle to score with 50 seconds left the half to lead 13-7 as the extra point went wide.

The 3rd quarter was short as both teams used the ground for most of their plays.  Finally the Raiders got the ball back on their own 43 yard line.  Dave Wood and Dustin Butler got he call for most of the gainers on this possession. John Shoulders also hit Devin Roten with a pass to get a 1st down on the Laker 33 yard line.  Shoulders also hit Dave Wood out of the backfield to the 9 yard line and Dustin Butler did the rest to tie the game with 19 seconds left in the 3rd quarter.  Ethan Chenoweth put the Raiders on top for good with the extra point.

Russell County drove the ball to the 34 yard line when Dave Wood came through with a big sack on the 38 yard line.  Then Hayden Belden intercepted a Laker pass on the 8 yard line.  John Shoulders hit Devin Roten to get the Raiders to the 24 yard line. Julian Barbour ran to the 30 yard line.  Devin Roten caught another Shoulders pass at the 36 yard line.

The Raiders were in control when Russell County recovered another Raider miscue on their 21 yard line. The Raider defense then went to work and Dave Wood tackled the Lakers in their end zone to up the lead to 16-13.

The Lakers had to kick from their own 20 yard line. The Raiders fell on the ball on the Laker 31 yard line.  Dave Wood got the call and sealed the deal with 2:30 left in the game.  Russell County would start their final drive on their 40 yard line when Hayden Belden put an exclamation point on the victory with his 2nd interception of the game. The Raiders took the victory line for the final minute and boy did that feel good.  The Raiders travel to Paducah Tilghman this Friday for a 7:30 kick off.  Hope you can make the trip, but just in case you can’t WLOC will bring all the action back to Hart County.  GO RAIDERS!!!!!