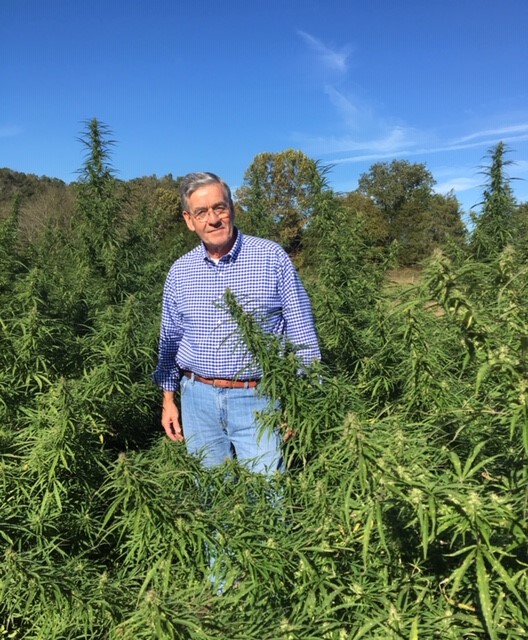 Gary Bell in a field of locally grown hemp just before harvest.

While strolling through his field of traditionally grown Kentucky hemp, Gary Bell’s confidence and conviction are evident. One might think he has always been a believer, but it isn’t so.

When his former business partner L. Rogers Wells first expressed interest in growing hemp to produce a line of CBD, Gary was admittedly skeptical.
“We had partnered on so many ventures through the years, but I was unsure of the hemp industry,” Gary said.
However, Wells’ was fascinated by what he learned about CBD and was insistent that they pursue having a company of their own. Earth’s Glory was founded in 2015.
In the early days of the company, it was a bumpy road with an uncertain future.
“We had to learn everything there was to know about it,” he said.
Early on in the learning process they decided not to have investors. Sink or swim, keeping investors away from the process meant having control of the process from start to finish.
By the end of 2016, both Gary and Wells were feeling disillusioned with their new venture.
While pursing another potential endeavor in Florida, they discussed discontinuing Earth’s Glory in the company of a friend. As it turns out, her presence was providential.
“Rogers’ wife had a friend in Florida named Kelli, and Kelli had been taking Earth’s Glory. Earlier in life, she had been a triathlete, but she was suffering through cancer,” said Gary.
“When she overheard us discussing that we might stop producing CBD, she said ‘please don’t’.”
As it turned out Kelli had used Earth’s Glory to help her live a more active and fulfilling life as a cancer patient.*
Kelli’s story was moving, and it changed their minds about ceasing production.
“We gave Kelli the nickname ladybug. Aphids can destroy hemp, but ladybugs eat the aphids and save the hemp, and Kelli saved Earth’s Glory.”

Determined to make a success of it, the business partners re-evaluated their operation and moved forward.
In August of 2017, Wells, who had been the driving force behind the venture, passed away, leaving Gary in charge.
“This was Rogers’ dream. He approached this differently than he had other businesses. This was one of his feel good projects, his way of giving back,” he said.
“I warmed up to the whole idea when I saw the results.”
Motivated by stories like Kelli’s and his experience with Earth’s Glory CBD, which he takes every day, Gary put his skepticism aside and picked up the torch.

Having grown up on a farm Gary had a strong connection to Kentucky farming and agriculture.

“I am a banker by trade, but I will always be a farmer,” he said. So, it only made since that he wanted to keep that down to earth mentality when it came to growing the hemp by making it an all local operation, that begins on family farms and adheres to the growing Kentucky farm to table movement.

He enlisted the help of two local farmers, Jimmy Vibbert and Terry Knipp. Vibbert has worked on the Wells Farm for well over three decades. Knipp and his family go back over four decades with Gary’s family. Both men have been dedicated to producing quality hemp plants, grown without the use of pesticides and herbicides.

In a world where CBD and hemp are still greatly misunderstood, it has not been easy. But it has been gratifying.
Defining CBD

“People think it is a guise for marijuana. It’s exactly the opposite. All hemp is cannabis. All marijuana is cannabis. But hemp is not marijuana. They are genetically different,” Gary said.
He is also eager to displace the myth that hemp extract and CBD extract are the same. Hemp extract is very nutritious, but unlike CBD, it does not contain cannabinoids.
The growing of hemp, which is legal in Kentucky, is highly regulated from seed to harvest.
The best quality hemp tests high in CBD and very low in THC. They begin with an all female field, and maintain the correct levels through tedious care. The exact location of the hemp and where it is kept must be mapped using GPS coordinates, and a current year MOU number or certificate is required in the transport vehicle.
Earth’s Glory currently produces two strains of hemp, which are never mixed.

Once the growing process ends, the regulations are far less strict, but Gary has insisted on keeping on the straight and narrow so that Earth’s Glory stands apart at a time when everything hemp-related has become popular.

For example, many of the companies producing CBD and are not growing their own hemp plants, and although it may be processed in America, they are not American companies in the strictest sense of the word.

With Earth’s Glory, every bit of the work from growing to bottling is done here in Kentucky, with great attention to quality that begins in the field and ends in the laboratory.

For starters, because it is not required, many companies do not do third party batch testing.
“All of our CBD is batch tested by a third party. I wouldn’t put something in my body that was not. I wouldn’t drink a glass of milk that wasn’t tested, and that is why we insist on testing every batch.”
The other thing that makes Earth’s Glory stand apart in a competitive market place is the way it is extracted. Many companies use a process called ethanol extraction to remove the cannabinoids. It is less time consuming and costly than the CO2 extraction method used by Earth’s Glory, but scientifically speaking the process is anything but ideal.
“Our CO2 extraction is focused on preserving the beneficial compounds present in hemp, including an array of cannabinoids and terpenes. The goal is to remain as close to the original plant as possible in terms of the cannabinoid profile, which, in turn, enables development of a full spectrum product. We avoid the high heat and harsh chemicals that are required in other extraction methods, such as those required to make CBD distillate and isolate,” said Marie Grinstead, Earth’s Glory chemist and owner of Botanical Processing, LLC.
Through CO2 extraction all of the properties are preserved for a combination of CBD and CBDa oil that is blended into grape seed oil.

The Future of Earth’s Glory

From an agricultural prospective, hemp is not a miracle cure when it comes to farm economics. At least, not yet.
“Since tobacco production diminished, people have been looking for the answer to the family farm crisis. It is not hemp. Hemp is a speciality crop,” Gary said.
The amount of hemp it takes to produce a large yield of oil is very small comparatively. The market for industrial fiber hemp has not yet risen to match production. Only time will tell what hemp’s probable economic impact might be.

Nearing the end of its third year, harvest time has arrived and the company is growing. In 2019, Earth’s Glory currently offers three different potency tinctures, a 250mg, 500mg, and 1000mg bottle. The oil in the tincture bottles is taken sublingually. In response to the needs expressed by their customers, topical Earth’s Glory products will be released in 2019.
Although regulations prohibit Earth’s Glory from making specific claims in regards to health and wellness, success stories from those who use the oil keep Gary motivated.

*A video of Kelli’s story, told in her own words, can be viewed at earthsglory.com 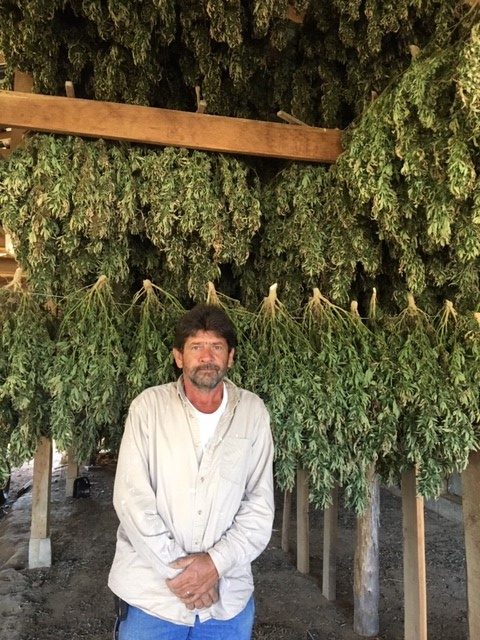 Farmer Terry Knipp is one of the dedicated local growers who works for Earth’s Glory. 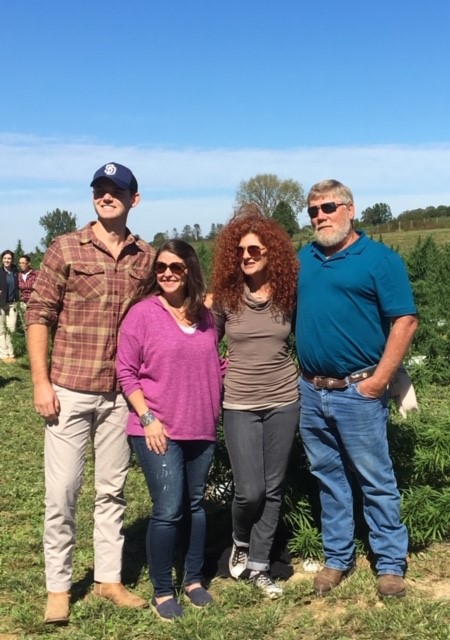 Jimmy Vibbert, far right, with a group of healthcare providers from Tennessee who toured the farm two weeks ago. 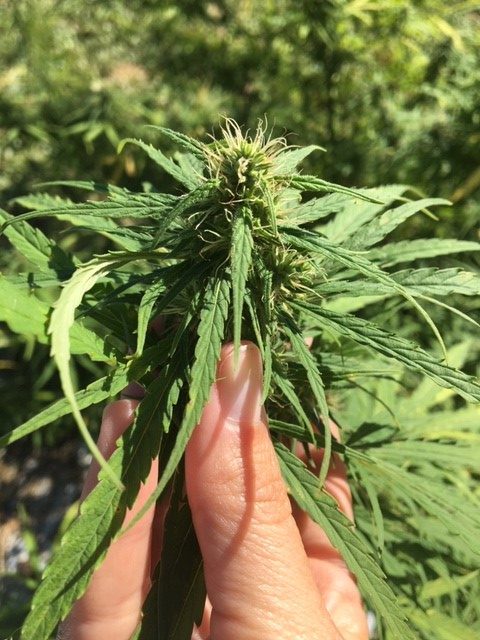 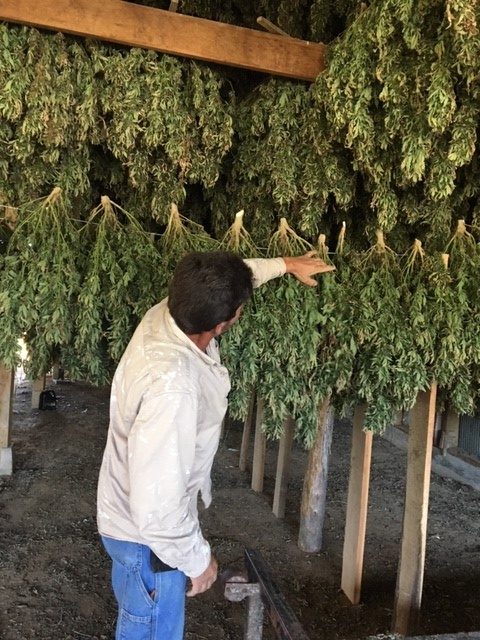 Hemp, drying in the barn before being taken to the lab for CO2 extraction. 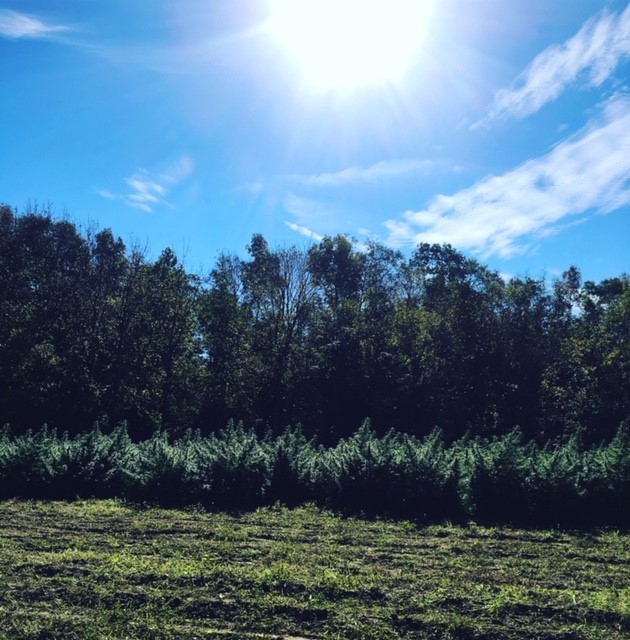 A field of Late Sue hemp near harvest time.