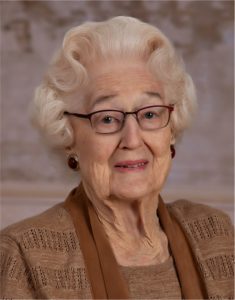 She was born January 2, 1921, to the late Evie Rena Steen and Lambuth Luther Moss and spent her childhood years growing up in the Griderville community and graduated from Hiseville High School in 1938. She met Bertrand Lewis Bauer, Jr. in 1947 and they were married in 1948 at St Helen Catholic Church in Glasgow. They resided in the same Griderville community in which they met for almost forty years and she continued to live on the family farm until her passing.

She attended and received her teaching certificate from Western Kentucky State Teachers College and later returned to receive her bachelor’s degree. She began her teaching career in Shelby County in 1941, where she taught until 1947. In 1948 she started teaching in Barren County, teaching in rural one-room schools, but the majority of her thirty years in the county were spent at Hiseville High School where she taught first grade until 1984. In total her teaching career spanned thirty-seven and a half years.

Eva Rose was a faithful member of Hiseville United Methodist Church since childhood. She was a loving wife, mother and grandmother who cared deeply for others and was an influential figure in shaping many young lives in her community.

Funeral services will be at 1 p.m. on Monday at Hatcher & Saddler Funeral Home in Glasgow, with burial to follow in Horse Cave Municipal Cemetery. Visitation will begin Sunday at 1 p.m. and will continue until 8 p.m. and then again Monday before the service. Memorial contributions may be made to the Barren County Educational Foundation or to the Barren River Animal Welfare Association (BRAWA).