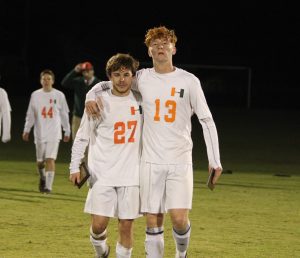 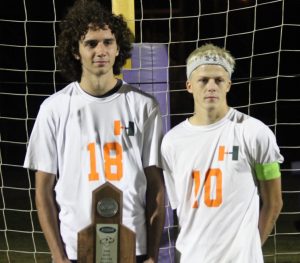 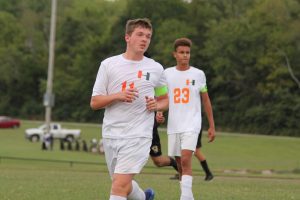 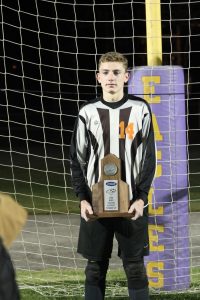 Hart County Boys Soccer Team made Regionals for the first time. However, bad luck hit the team before Hart County’s, first ever, Regional game. Senior assist leader, Carter Shelton, had a medical emergency and had to have an appendectomy procedure on Friday night. Carter was only able to watch from the sidelines on Wednesday night while his team took a few bruises on the field and off. Sophomore midfielder, Hugo Arce, had just returned after being absent for three weeks because of a bad knee injury. This being a fresh return hindered his ability to play at his usual 100%. The team was pushed to their limit and exhausted each player with only having two subs on the bench. In the first half no scores were brought in. Shorthanded the Raiders began to slow down and Nelson County completed a goal, scoring one point with 16 minutes left in the game. Three minutes of play passed by when Nelson County pushed another point onto their scoreboard, 2-0. Exhausted, disappointed, and undoubtedly longing for the action their assist leader usually brings to the field, the boys began to wear down and lose momentum. Nelson County won 2-0.

Although this game wasn’t won, players Kyler Goosetree and Cameron Tennyson were named All Regionals players of the game.

Senior Assist Leader, Carter Shelton, finished the season coming in at #22 in state assist with KHSAA Soccer Stats. He accumulated 18 total assists in 18 games this season. Braydon Bell claimed #10 in Scoring Leaders with KHSAA Soccer Stats having scored 35 goals in 18 games. He was #15 Points Leader with 35 goals, 8 assists, and a total of 78 points for the season. The stats from the last three games had not been posted at the time these stats were reported.

Others named KHSAA Soccer Stat Leaders were players Junior, Cameron Tennyson; Junior, Kyler Goosetree; Sophomore Goalie, Ethan Chenoweth. Team Defense Players were senior player, Nayt Smith, with most defense saves,  and Freshman, Matthew Champlain, also with defense saves. All players have played winning and record-breaking roles for this team. These boys have had a very successful season ending with a 13-8 season. There is nothing about this season that anyone should be disappointed in. One last congratulations is given to the Hart County Boys Soccer Team. Following them through most of their season has been truly been uplifting. There will definitely be a lot of anticipation for next year’s team to take the field once more. Way to go boys and thanks for proving your greatness. 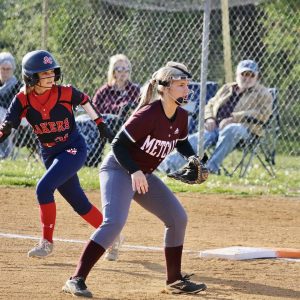 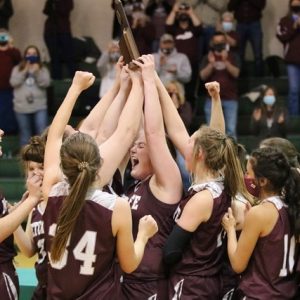