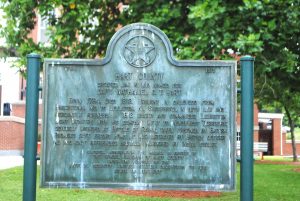 “Grateful appreciation: This marker is erected by the school children of Hart County under the aspices of the National Society United States Daughters of 1812 State of Kentucky 1949.”  This is the inscription on the historical marker in the Munfordville courthouse lawn that is dedicated to Nathanial G. T. Hart that explains how Hart County was named.  Again, the school children of Hart County have stepped up to the plate and raised enough money to have the old marker restored.  The marker is in rough shape and having one restored is costly, $840.00 worth of expensive to be exact.  Mr. Jerry Matera put out a challenge to have the school children in Hart County again be involved in this endeavor to raise the money.  Susan Rowe, a liaison for the Hart County Public Library, took the challenge and ran with it.  She ran straight back to her residence of Bonnieville and immediately made the idea fun and competitive.  Ms. Rowe first went to the PTO of Bonnieville School and asked them to join her in the plight to raise the funds for the sign.  A competition was decided upon for each homeroom to see who could raise the most money.  Ms. Rowe made jars with each classroom’s name on it and the games began.  It only took one week for the school to reach the goal set before them and exceed it!  The totals are in and the results are as follows:

This equals a grand total of $848.97, exceeding the goal of $ 840.00 by $8.97 for just one week of collecting.  In addition to knowing that Bonnieville School has single handedly paid for the restoration of such an important historical marker in our county, the two classes that collected the most money, which was only separated by $.68 cents will be invited to the unveiling when the old historical sign is completely restored to its original beauty.