Many of my generation are non-Facebook users and will leave behind a faint electronic footprint. Our childhood and young adult accomplishments will more than likely be ignored because decades of our existence is documented inside hard bound copies of newspapers hidden away in some backroom or dingy closet.

I have done my very best to honor the communities we serve by preserving all that has been given to me and will certainly pass along to the publishers who follow. Because unlike our work today this data is a pocket of decades of life that can’t be Googled, or shared at a whim; without preservation these old bound copies and the life they contain will be gone forever.

A legacy almost forgotten was shared to me by a third generation Barren County barber, Jonathan Young. As a child Jonathan would play with the shaving mug collection his grandfather Clyde had been collecting since he began barbering back in 1926. One particular mug had the name J. H. Yancey on it. His grandfather would tell him to be careful with it because it belonged to a prominent Glasgow business man and someday would be worth a lot of money.

It wasn’t until I renovated an old building on the square in Glasgow and opened a Brewery and Gastropub with the name Yancey’s that it brought these memories alive for Jonathan.

The building has had the name prominently displayed in concrete at its top since 1929 yet dozens of life-long Glasgow residents asked me where I came up with the name.

The mug is symbolic for my thoughts of mortality because few have even heard of the man today and until I stumbled across a building his son built; I myself would have known nothing of him.

This man served as a confederate soldier, struggled in life and love as most and left a fortune to his 4-year-old son like few before him with his passing back in 1904.

My research obtained from the Museum of the Barrens, The Courier-Journal/Louisville Times Company and The Glasgow Republican detail in ink a strong self-made businessman who loved his wives, and wanted nothing more than to have an heir. His first wife died at 49 after losing two children in childbirth and another at the age of 2; and a second wife 32 years younger who gave him a son named Grayson who inherited his fortune and built my building on the square in Glasgow.

If you have Internet you can read my research at yanceysbrewery.com or find Yancey’s Gastropub and Brewery on Facebook; if you are not an Internet user and intrigued as I am about understanding our past you can come by Yancey’s in Glasgow and ask for a menu. We tell his story on the back of it.

As a community publisher for 20-years I am beginning to question my own legacy; I’m wondering what those who follow me will read or think of me.

I imagine it would be easy for many enemies of truth to place me in some box; a box earmarked for political zealots. But with a little research it could be debunked because my work doesn’t have a political common denominator; my work for truth has no party loyalties.

Even if I miss the mark; I want to be remembered as a publisher who simply did his best. His best to be honest, his best to witness love and compassion and his best to stand beside those among us who find themselves standing alone.

As a man outside his work I strive daily to be the best provider, father, friend, brother and son I possibly can be while giving thanks for my blessings each and every day.

I want to thank Jonathan Young and his family for thinking as I do and offering his grandfather prized mug of J.H. Yancey to be placed on display inside the building his son built.

I can think of no better monument for a father and son. 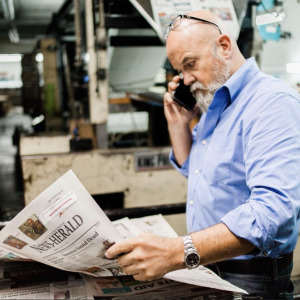 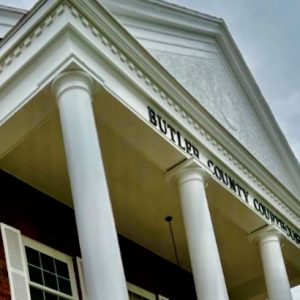