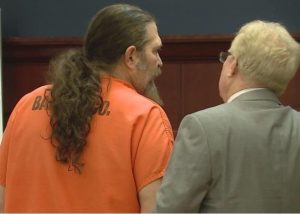 Gentry was arrested March 28, 2016 after attempting to hire an undercover officer from the Kentucky State Police to kill James M. Darnell.

The KSP first became aware of the situation when an anonymous caller contacted the Nashville Metro Police with information, saying that Gentry was looking to fund a murder-for-hire.

Once tipped off, members of the KSP Drug Enforcement Special Investigations branch were contacted, and set up a meeting between Gentry and an undercover officer who Gentry thought was a man who wanted to be hired to kill Darnell.

The undercover officer, along with other uniformed officer stationed in the area, arrested Gentry at the sight of the meeting, at what was then the K Mart parking lot in Glasgow.

Gentry was indicted by a grand jury last April, after his phone and email records were made evidence via a  subpoena. Gentry  pleaded guilty as part of a plea agreement on April of 2018.

Gentry, originally from Green County  was the owner of Scott’s City Limits in Edmonton, which burned to the ground not long after his arrest.

Gentry was previously indicted in Metcalfe County on two counts of possession of a handgun by a convicted felon and trafficking a controlled substance.