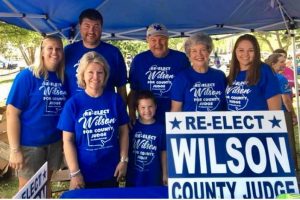 Greg Wilson, who was born and raised in Metcalfe County, has served the county as Judge-Executive for 12 years, and he is proud of the progress he has seen for the communities he has served.

When Wilson first sought his office,  it was not because he had any contempt for his predecessor.

“I felt like Donnie Butler had done a very good job, but I also felt like it was time for a younger generation to step up and take the reigns of the county,” Wilson said.

Once elected, Wilson made it his endeavor to do things he felt would improve life in a Metcalfe County.

“I think I am the most proud of the new infrastructure, including roads and bridges, and also the garnering of grant money to make those projects possible.”

Having tapped into funds from FEMA, many of the projects which have made the roadways safer and better in our rural county were done with little or no money from the county.

“Many of those projects, FEMA paid 90 percent and we only spent ten,” he added.

One of the things Wilson is the most pleased with in his tenure is the addition of the second interchange.

“That was a state project, but it was not in the six year plan when I came into office. I worked with the state and it became part of the six year plan. I think over time, we will see the fruits of that.”

Another project near and dear to his heart is the recent completion of the Government Center.

“It was a long overdue project and having the new facility has improved working conditions for the patrons and staff and accessibility for everyone,” he said. “It will be an asset for years to come.”

Wilson says one of the challenges he has faced is that people do not want to allow change.

“Change is inevitable,” said Wilson. “People need to be more open to the possibility of change.”

If reelected, it is Wilson’s hope to keep the county moving forward in a positive direction; Bringing more industry to the area is one of his goals.

“I am realistic, and rather than having one facility come here with a hundred jobs, I’d rather see five with twenty jobs each, so that people will have options and our youth will have a reason to stay here.”

As a father of four, Wilson is concerned about what the county has to offer those being raised here.

“I’ve lived and worked here all my life and o want my children and everyone one else’s to be able to live and work here too, and build successful lives,” he said.

He hopes his service to the county brings that positive impact, as he follows in the footsteps of those he admired as a child.

“My uncle was county judge, and i had another uncle who was circuit court clerk in Barren County. From an early age, being around them and seeing them involved, helped me to understand and appreciate what being involved in public service can do for people.

Maybe it made me aware that you have to be willing to step up. And I hope more from the younger generations do the same.”