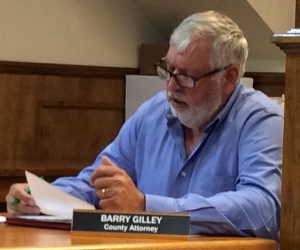 PJ Martin, Office/News Reporter, Metcalfe Division – The September 25th meeting of Fiscal Court began with the first reading of Ordinance No. 18-1010 to allow relocation of the meetings from the historic courthouse to the newly completed Metcalfe County Government Center. The ordinance was approved with the second reading scheduled for October 9th. The ordinance will take effect on October 23rd with that meeting at the 201 North Main Street location.

The Judge/Executive and Treasurers’ offices have been relocated to the lower floor of the government center building and are open for business. The PVA and Sheriff’s offices will be moving in the next few weeks, but the County Clerk’s office has decided to wait until after the general election is over to make it less complicated for voters.

Magistrate Moe Hensley raised questions concerning economic development in Metcalfe County. “I need to know about this industrial recruiter. If we’ve still got one, if we’re still paying, do we need to get rid of them? There are too many places around here getting stuff [factories] and we ain’t even getting a sniff.” Hensley and the other magistrates went on to voice their concerns about surrounding counties securing new industry while Metcalfe has received none. 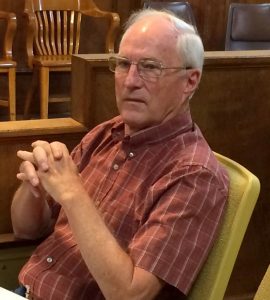 Bill Lytle, chairman of the Edmonton Metcalfe Industrial Authority Board

The chairman of the Edmonton Metcalfe Industrial Authority Board Bill Lytle was in attendance and stepped up saying, “We have the same question!” Lytle explained that he had spoken with Ron Bunch, CEO and President of the Bowling Green Chamber of Commerce several times recently regarding “how we are set up with regards to the other counties and with the Bowling Green Area Chamber.”

“I agree with you 100 percent about that disparity and I’m not getting all the answers I like. So we need to reevaluate,” stated Lytle, referring to the recently renewed contract with the Bowling Green Chamber of Commerce who is supposed to be assisting Metcalfe County. “We do have a general agreement that if we want to break the contract or they want to break the contract, we can do that at the time of our choosing. But that’s not a legal answer. That’s just a general handshake answer that we have with them.”

In response to the initial industrial recruiter question County, Attorney Barry Gilley added, “We hired the chamber down there [BG]. That was their employee.”

The magistrates referenced a variety of counties and cities nearby that had recently gotten new factories employing 25 to 40 people each. “It is just kind of disheartening when you see a company that is going to build a 40,000 square foot [building] on 18 acres and we’ve got 30 something [acres] with already a 30 [30,000 sq. ft. building] with room for expansion. The majority of its there!” said Hensley referencing the construction of a factory in Bardstown in comparison to the Spec building in Edmonton. “It’s a hard pill to swallow.”

“My thoughts right now are how we can do a better job of addressing the problem. I sympathize with what you are saying,” said Lytle.

Magistrate Scotty Mosby then asked Lytle, “What happened to the whiskey barrel facility that was wanting to come here? Lytle replied, “I can’t tell you. We can’t discuss it because it’s still out there.”

The subject of creating a tri-county industrial park involving Metcalfe, Monroe, and Cumberland counties together was brought up by Judge/Executive Greg Wilson who credited Representative Bart Rowland with the idea. “When you go in with another county there is more opportunity for more money to help a project along,” Wilson noted that the economic development people in each county would need to set down and discuss the idea before the legislators go back into session. Wilson stated that he would follow up with Rep. Rowland.

Magistrate Scotty Mosby posed the question of why the state had chip sealed Mell Ridge Road and that he had received questions from residents concerning it. Wilson replied that he had spoken with Joe Plunk of the Kentucky Transportation Cabinet and that, “the state seems to think that putting a chip seal down over the top of the blacktop will help save that blacktop an additional 7 – 8 years.”

With the abundance of rain lately drainage issues have become apparent. Hensley noted that the drains around the square will not take the same amount of the water since the construction of the sidewalks. “The holes are a little smaller than what we had,” said Hensley. He questioned if larger grates or larger holes would work and still meet requirements.

The next meeting of Fiscal Court is for October 9th at the historic courthouse.