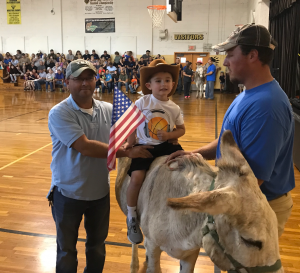 Cub Run Days got off to a good “kick” when Hart County veterans rounded up their personal donkeys to play a game of Donkey Basketball on Thursday. While the visitors sat idly by watching the court, the players attempted to make some goals while on the backs of a few donkeys. Not only was Jeff Wilson competing in apolitical race for Sheriff but he also challenged Boston’s Boys in a friendly, yet peculiar, game of Donkey Basketball. The show seemed to be more of a rodeo for a greater part of the game, with intermittent rodeo clown shows. This was all in good fun and everyone seemingly enjoyed observing this hilarious game of Donkey Basketball.

The big excitement was Friday with all sorts of things to entertain from dunking booth and photo booth, cake walk and sucker pull, a rock wall and haunted house, and so much more. The car show did get postponed due to bad weather.

Saturday was the big parade. With off and on showers many folks assumed the scheduled events would be called off but at the last minute they decided the parade would go on. After that vendors sat up in the gymnasium of Cub Run Elementary, thus keeping everything dry. Once again Cub Run Days was loads of fun and a complete success.