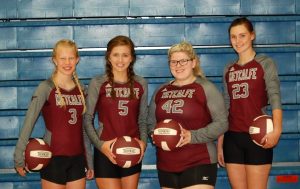 The Lady Hornets kicked off the tournament with a victory over the Lady Colonels in straight sets. Metcalfe jumped out to 13-5 lead behind aggressive play and hustle on the court. The Lady Colonels #34 McKeeya Faulkner had two nice digs and #12 Stacia Burnett blocked a Metcalfe attempt at a power slam to pull within six points, 13-7. Metcalfe answered when senior Kamryn Russell slammed a shot past the Caverna players at the net and #6 followed that with a slam of her own, 15-7.

The lead reached double digits, 19-9, when #3 placed a soft-touch shot over the heads of the Caverna frontline. That’s win Lady Hornet #1 Konnor Gallagher scored six straight aces to close out game one against Caverna.

“That was a nice series of serves for us,” said MCHS head coach, Whitney Estes. “Konner is a strong server, plays hard and covers a lot of space for us. She did a great job serving and playing at the net in that first set.”

The second set started out the same way but in game two, Caverna fought back from a 19-9 deficit. Lady Colonel #14 Amayah Nolley scored on three straight aces, 19-12.  Burnett pulled her team within three points, 19-16, with her powerful serves but, Metcalfe rebounded to take a 21-16 lead and won 25-19 to take the second set.

“We slowed down in the second set, perhaps got a little over confident,” began Estes after their win. “I always tell them, keep talking-keep moving. I thought the entire team played well. We talked and moved and only had few dropped balls and missed serves. I’m proud of the effort and performance.”

Estes said she felt the “whole team” stepped up for the early game. “Maybe eight in the morning is our best game time,” she added smiling.

Estes talked about her teams’ progress so far this season in a pregame interview. “We won some sets early but struggled in the middle of the season,” Estes commented. “We had a big district win over Cumberland recently and seem headed back in the right direction. We want to be ready for district tournament time.”

Estes said her four seniors (#3 Jackie Vrocher, #5 Hannah Brown, #42 Kara Brooke Shive and #23 Kamryn Russell) have provided “great leadership.” “I have great girls on this team and the seniors have provided great examples for the younger players to follow,” she said. “They have stepped up and stayed positive.”

Estes is in her first year as the head coach and has enjoyed the learning experience and the challenges that go with leading a program. “I’ve been an assistant for five years and that helped prepare me,” she added.

Estes works at the middle school and knows the value of “starting players early.” “We have a middle school program and that is awesome,” she concluded. “They learn the fundamentals and come to high school and already know how important it is to communicate. This team has really improved this season in communication. That is one of our strong points and I thought we did a good job communicating in the win over Caverna.” 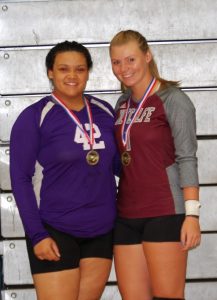 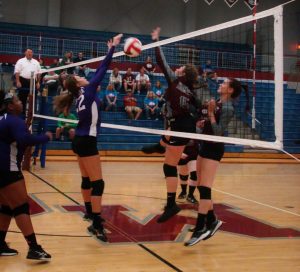