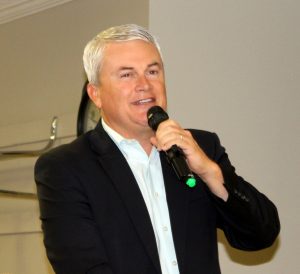 The special guest speaker of the morning was Congressman James Comer, who began by saying, “Pound for pound the Metcalfe County Chamber is the best chamber in the state.”

Comer pointed out that the focus of the new Congress and the new administration has been to try and grow the economy realizing that not all the problems can be solved by a strong economy, but a lot of them can. “If people have a job, they’re making a living, they are less likely to get involved with drugs or have any type of addiction.”

Working toward that goal was the passing of The Congressional Review Act, which allowed the president to look at all the regulations that were passed by executive order during the previous administration that could hold the economy or the private sector back. An example of this would be the regulations against the coal industry in eastern Kentucky. Congress has also focused on helping community banks and making it easier for small businesses to receive loans.

Another goal of Congress is health care which is being looked at one piece at a time. Comer explained that President Trump is focused on lowering the skyrocketing cost of prescription drugs, but also creating associational health plans, and allowing insurance companies to cross state lines thus allowing citizens more coverage choices.

In December of 2017, Congress passed the Tax Cuts and Jobs Act, which reduced taxes across the board for everyone. Comer relayed some numbers for the 1st District, which consists of 35 counties and is one of the poorer districts if you look at incomes. When filing taxes, 81% of the people in the district took the standard deduction. “That’s one of the highest in the nation,” according to Comer.

Comer remarked that he was glad to be put on the Agriculture Committee, because “The farm bill is something that is very important to this area.” The five-year bill expires September 30th. Comer also noted how under-represented the farming industry is in America. A majority of the bill is about food such as the school nutrition program and SNAP benefits. “We have an opportunity to try and transition people from welfare to work that are able-bodied.” He noted that it is also a good time to create an incentive to get people off welfare and back into the workforce.

Congressman Comer ended by presenting the Bicentennial committee a copy of the proclamation read on the floor of Congress commemorating the Edmonton Bicentennial. 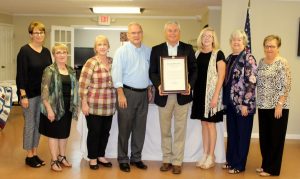 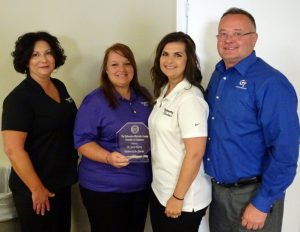 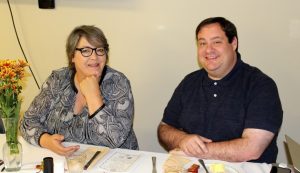 Barn Lot Theater sponsored the breakfast and representing them were Shane Chambers, Executive Director and Kyle Hadley, Administrative Assistant. Chambers gave a brief history of Barn Lot Theater, which began its performances at ‘the barn’ in Bowling Park. Hence the name Barn Lot Theater. The community theater was initially the dream of the late Tim Best who was the music director and drama teacher at the Metcalfe County Schools for many years.

Hadley informed the crowd about the upcoming 2019 season, which sounds as if it will be a very comical one. The six plays scheduled are: Last Round Up of the Guacamole Queens, The Beverly Hillbillies, Red White, and Tuna, Faith County, School House Rock Too, and Every Christmas Story Ever Told. Those attending the breakfast were also given a special offer on season tickets to Barn Lot Theater. 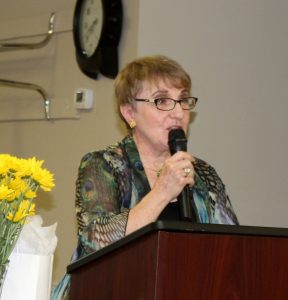 An update on the Metcalfe County Historical Society was presented by Kay Harbison. The society began in 1978 and has around 50 members.  Harbison optimistically stated, “We need to start looking at some of these older structures and try to preserve them. We need to preserve the stories of our older people because they are slipping away too…but we need help.”

The historical society is currently taking care of the old Metcalfe County Jail and the Edmund Rogers Cemetery. They also have plans to create a small museum in the historic courthouse. As fundraisers, the society sells a historical calendar each year and are currently selling tickets for the Bicentennial quilt to be given away in December.

As usual, those in attendance were treated to a hearty breakfast catered by Diane’s Cakes and Catering.