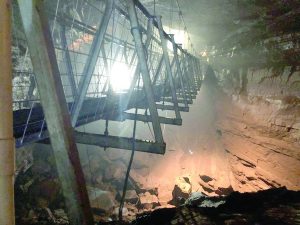 A breathtaking climb down was well worth the breathtaking view after crossing the swinging bridge. Photo by: Scotty Dennis

“There’s a lot of people in this town who don’t think this is a very big cave,” said David Foster, from the American Cave Conservation Association. He went on to say, “They’re going to be surprised.” Two men, from Scott and Murphy Inc. of Bowling Green, worked together in constructing this swinging bridge. Potentially, the bridge will open the entire cave for tours to the Sunset Dome, a dome-shaped chamber roughly 100 ft. high and 200 ft. in diameter; currently this section of the cave is inaccessible.

“When passing over the underground river by crossing on the swinging bridge there’s a rush of excitement that lingers in the pit of your stomach as you’re swaying back and forth and, sort of, floating up and down,” according to an out-of-towner.

Foster said ACCA wanted a swinging bridge in the cave, as opposed to a traditional path, in hopes of becoming more competitive with the, “internationally known,” Mammoth Cave National Park. Foster also claims to rebrand The Hidden River Cave to become more of a tourists’ adventure park with ziplining and rappelling.