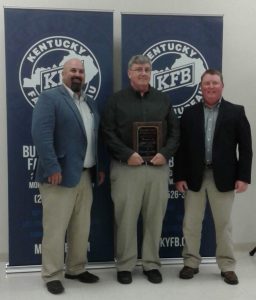 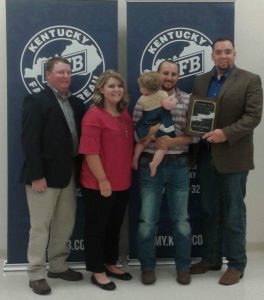 The Outstanding Young Farm Family of the Year is Nathan, Kaylan, and Hadlee Mckinney. Also pictured is Shane Wells and Caleb Smithson.

What a big year for Butler County Agriculture.  Butler County Farm Bureau held their annual membership meeting on Sept. 11.  This is their 80th year of providing service to families.  Shane Wells opened the meeting and Greg Drake introduced the many visitors for the evening.

The big winners for the night were Nathan McKinney and his family for being recognized as the Outstanding Young Farm Family of the Year.  Lloyd Saylor was also recognized for his Outstanding Service to Agriculture.

The McKinney family not only stays busy on the farm but Kaylyn his wife also teaches at North Butler Elementary School.  Their daughter Hadley is already learning the ropes of what it takes to live life on the farm.

Greg Drake said, “Lloyd is very driven to help the kids.”  Saylor added, “Farm Bureau has had more of a positive effect to this community.  You all are leaders and get stuff done.”

Saylor said he loves working with the kids and it means so much to him.

Some of the resolutions for 2018 include; supporting the ambulance board and the service they provide to the county and supporting the Rochester Dam Coalition in their effort to secure funding to repair the damn.  Agriculture is Butler County’s largest industry and economic driver.  Farm Bureau members believe that there should be two agriculture education teachers at the high school and they are fully supported and funded by the school district.

Shane Wells has been elected State President for the Kentucky Association of Conservation Districts.  The group congratulated him on his appointment.

The Farm Bureau strongly supports the Butler County Fiscal Court to landfill regulations.  They recommend all county roads and bridges have weight limits that support the modern farm equipment, and strongly encourage the Fiscal Court to develop and Implement a comprehensive economic development plan.  The organization also encourages school districts to require two mandatory school trips in the educational career of each student.  They also oppose the removal of Lock 3 and 5 on the Green River.