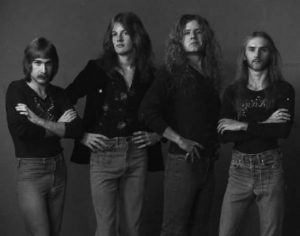 It was 1968, and across the nation teenagers were tuning in, turning on and dropping out. Music was a big part of the cultural revolution that evolved, and it was no different in Metcalfe County, Kentucky.

“We were all decked out in our hippie clothes, of course, because it was 1968. The first show I ever played was for a 4-H Talent show. It was in the old gym, but to me, it might as well have been the Taj Mahal.”

Greg played with Kevin Emberton, Ronnie Miller, Gary Martin and his sook to be longtime bandmate, Richard Young. They called themselves The Grane.

As it turned out that long ago 4-H variety showed held November 21, 1968, was a pivotal moment in time for Greg Martin and Richard Young; But the story of their love of music started even earlier on life.

Daddy loved music, and literature and the arts and Fred and I were privileged to be part of that all our lives,” said Richard.

Richard’s 8th-grade year, he came to be a student in Edmonton when his father transferred from North Metcalfe to Edmonton to do a year of student teaching.

It was that twist of fate that made it possible for Richard and Greg to meet.

Martin was born in Louisville, but his parents were both from Metcalfe County.

“I loved coming down to the country in the summer and staying with my aunt, Ruby Shive,” said Greg. And when Greg’s father became disillusioned with life in the city, he moved them back to Metcalfe around Christmas of 1956.

“We lived in the old Guy Mitchell place on Foundation Church Road until we moved up to Cedar Flat in 1957.”

Martin took to life in the country.

“I always liked seeing all the farm trucks asked around the square, Edmonton was always booming on Saturday,” he said.

At the same time, Richard and Fred Young, whose family had deep roots here, were making memories of those own.

“When we’d go to town with Daddy, we’d go to Rexall Drugs and get a cherry coke and tuna fish sandwich,” Richard said. “We loved to go to the stock pen, and our relatives had the Polson Vanzant International Dealership.”

Richard and Fred’s family had a long legacy in the county, with their great-grandfather Emmitt Young and their uncle Fred Polson both having served the county as sheriff once in time.

Needless to say, Richard and Fred kept the legacy alive but took it down a whole new path.

“I couldn’t really see me or Fred being sheriff. Music was our calling.”

For Greg Martin, music was an escape from the boredom of being a city kid who moved to the country.

“Back then, you could pick up a Chicago radio station in the evening. I loved listening and that’s why radio is my second passion,” said Martin.

It was during that same time that he started picking a guitar. He was also a bag boy at Rush’s Market.

“There wasn’t much to do but play, by the fall of 1968, I had made up my mind that music was my calling. And that’s when stuff started happening, it was a God thing,” Martin said.

Wayne Sexton played in a rock band and he was one of my guitar heroes. He worked up at Polson Vanzant and I was up there all the time asking him how to play different chords,” he said.

Back then, people had charge accounts and local stores and that’s how Greg got his first stereo.

“I still remember the day I paid it off, Fred Vanzant said, ‘you’re a good boy Greg’.”

Only a couple of weeks after Greg decided music was for him his friend Larry Sullivan asked if he knew Richard Young.

“I met Richard and Fred, and we’ve been playing together now since 1968. It’s hard to believe it has been fifty years,” Martin said.

Martin and his bandmates feel it was definitely his destiny to do what he does for a living.

“It was meant to be. If Dad hadn’t moved up out of the city, I know music would have been part of my life but I don’t know if it would’ve played this big of a role.”

Martin also feels that this region of Kentucky is an axis for what he calls a musical stew.

“There is a burgoo of sound that comes from here, that is a cross section of rock and roll, the blues, bluegrass, and country, and all of that makes for a unique medley of music that helped us to develop our name and sound.”

“I feel very fortunate to be from this place we call home. And glad we’ve helped put Edmonton on the map,” Richard Young said.

“We’ve been blessed,” Martin said. “And we will keep playing as long as God lets us.” 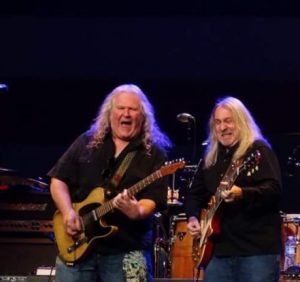