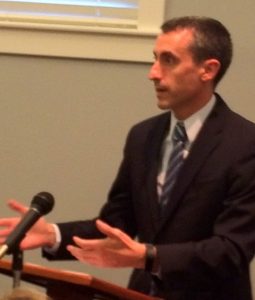 In a special called meeting on Monday, August 27th, the city council held the first reading of the new ordinance pertaining to the use of ATVs and Golf Carts within the city limits of Edmonton. A few major changes were made to the previously read ordinance making it necessary to hold another formal first reading.

The second major change was explained to the council members by Joe Plunk, Engineer for the Kentucky Transportation Cabinet. The ordinance will allow ATV and min-trucks on city streets, but does not allow them on state highways [68-80]. The exceptions are to make a 90-degree crossing of a state highway or to travel for no more than 2 tenths of a mile for farming purposes.

Council member Curt Estes exclaimed, “People need to understand that we have no control of state highways. That is the misconception.”

“From the city limits, its state highway …up to the light,” pointed out council member Billy Jeffries. “A lot of people are going to think, well this is a city street here, this is Stockton [Street]. We’re going to ride this. When actually they can’t.”

The ordinance requires that all ATV’s, golf carts, and mini-trucks have insurance coverage, be inspected by the Metcalfe County Sheriff’s office, and the purchase of an annual permit costing $10 before the vehicles are allowed on city streets.

Each type of vehicle also has specific criteria that must be followed to allow their use such as the driver must hold a valid driver’s license, seat belts must be used, driven between sunrise and sunset only, lights illuminated at all times, and passenger capacity limits be followed. It was also noted that these vehicles are not allowed to cross four lane highways.

The ordinances second reading was held on Thursday, August 30th, passing with a vote of 3 – 2. The council member’s casting votes against the ordinance were Wendell Sexton and Austin Bragg. The ordinance’s second reading allows it to go into effect before the 200th Bicentennial Celebration on September 7th, 8th, and 9th.

A Summary of the City of Edmonton, Ordinance No. 2018-19-02 is published within this issue.