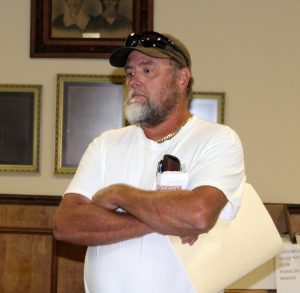 Vernon Engle of B & B Communications

Metcalfe County Fiscal Court – Once again the communication tower took center stage at the August 14th fiscal court meeting. Vernon Engle of B & B Communications informed the magistrates that he had never received the purchase order (PO) for the tower stating, “Seven weeks ago, you as a fiscal court told Vickie [Stephens] to issue me a PO to order the tower. It ain’t ordered!”

Teresa Hamlett asked why he had not received the purchase order. County Treasurer Vickie Stephens replied that she had delivered the PO along with other paperwork to the County Attorney’s office the morning after that meeting.

“I don’t have a PO. It wouldn’t be to me, because I don’t use them,” stated County Attorney Barry Gilley. Stephens then stated that she had delivered the PO to Gilley’s office understanding that all communication would be going through there for the project.

Gilley spoke up saying, “I do your legal work, I’m not your intermediary,” adding that the PO should go to them and pointed to Engle.

(According to the minutes of the July 10th meeting, Stephens issue a purchase order (PO) for one-half in lieu of the requested prepayment amount. This was to enable B & B Communication to order the tower.)

Engle, who was very upset after having made five trips (6 hours each) to the meetings, told the court, “This thing was done seven weeks ago. The rebar is on my trailer outside. It’s here! It’s delivered! If you take it that’s fine, if you don’t I’m gonna take it and throw it on the grass out here…You are in breach of contract!”

He further explained his frustration, saying that he had asked for the purchase order weeks earlier to enable him to get the tower ordered. The price quoted to him by Rohm Products was only valid for 30 days. “Y’all need to get your house in order.”

Engle expressed his mistrust of the Judge’s office and announced that after he unloaded the material, he was leaving, and walked out of the courthouse.

Regional EMS Director Gary Fancher, who was in attendance, then followed Engle to try and help calm the situation and offer his assistance. Meanwhile, a very emotional discussion was taking place inside. Gilley requested the court go into a closed session, which lasted approximately 10 minutes. When they returned, the misunderstanding of communication was cleared-up.

After Fancher spoke at length with Engle, he agreed to sign the contracts and proceed with the tower construction only if Fancher were made his contact person during the project. He made it clear that he no longer wished to deal with the Judge’s office.

Gilley instructed his staff to make the appropriate changes to the contracts, which were then delivered to the courthouse shortly after the fiscal court dismissed, and at last the contracts were signed for the construction of the Summer Shade communication tower.

A motion was approved appointing Nancy Steele to the Metcalfe Health Care Center Board filling the position left open when Byron Jeffries stepped down.

An order was approved unanimously to appoint Matt Gallagher to the Edmonton-Metcalfe County Industrial Development Board to replace Eric Eskridge.

The first reading of the ordinance prohibiting banners to be placed near the war memorial was postponed until the next meeting on August 28th.