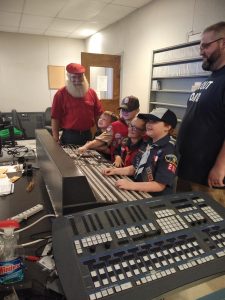 Cub Scout Pack 208 out of Morgantown was given quite the opportunity this month.  They were able to witness how a show is taped, through the eyes of a producer.  The group of youngsters was on set to talk on air about the benefits of scouting, they were able to go behind the scenes of the entire production process.

Scout mom Cricket Embry said, “the boys were very nervous and once offset, let out a lot of deep breaths and said their hearts felt like they were beating fast.  Afterward, they were given a tour of the station.  They got to see where the producer and director sat and what they controlled.”

Despite being so young, the group of scouts is determined to do great things.  They were thrilled at the chance, during the WBKO 13 tour, to learn all there was to know about broadcasting. The station is located in Bowling Green and airs a local show in the a.m. and midday about area happenings for communities.

She added, “the boys were also shown where all the segments are stored.  One of the things the boys enjoyed most about the tour was getting to touch one of the old control boards that are no longer used.  In fact, they got to push buttons on one that is an exact replica of one used in a Star Wars movie.  It was a great experience for the scouts.  They were able to learn how a news show is produced and also come away with an appreciation of public speaking.  While at the same time letting the community know who they are and how any boy or girl interested, may join.  This is definitely an experience they will remember.”