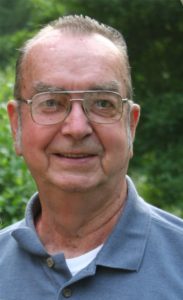 CENTER – George Robert “Bobby” Thompson, age 88, passed from this life on August 15, 2018, at the Medical Center in Bowling Green after a brief illness. Bobby was born on May 20th, 1930, in Center, Kentucky to the late Caily and Mable Thompson. He was retired from SKF having worked there for 27 years and was an active member of the Glasgow UAW including serving as President for a time. He served in the Air Force from 1951 to 1955 and was stationed at Andrews Field in Maryland. Bobby was a member of Center United Methodist Church.

Bobby was married to Stella Asbury Thompson for 62 years. They were married at the Methodist parsonage in Hardyville, Kentucky by Brother Knight. Bobby was a devoted husband and loving father, grandfather, and great-grandfather.

Bobby was preceded in death by his parents, Caily and Mable Thompson and an infant sister.

Visitation for Bobby will be held at the Center United Methodist Church from 2:00 to 5:00 p.m. Sunday, August 19, 2018, with a Memorial Service beginning at 5:00 p.m. A bereavement meal will follow the Memorial Service.

Alternate expressions of sympathy may be in the form of donations to the Center United Methodist Church. After cremation, inurnment will be at the Asbury Cemetery in Center. Hatcher & Saddler Funeral Home is assisting the family with arrangements.