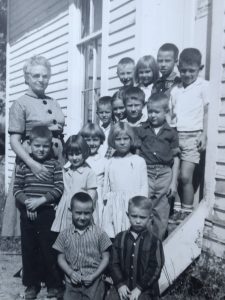 Ada Jeffries and her students at Poplar Log School, 1965

Thanks to good stewardship and a caring community, Monroe County students return this week to comfortable buildings with plenty of space, equipment, and technology But it wasn’t all that long ago that back to school looked very different indeed.

“You got your good basics from a rural country school,” recalls Iris Ellen Bartley, 98, of her time at Rush Point School. “Of course, a lot of children only went part of the time; they had to work. We’d walk dirt roads — no gravel — in mud up to the tops of our shoes, or barefoot. Lots of us just had Sunday slippers for church, and went barefoot the rest of the time anyway. We had to cross a branch, so we’d clean our feet off there. There were at least a half dozen of us on the road, so we’d walk together, carrying our lunches. On the way, we’d gather hickory nuts, maybe pick some flowers for the teacher. On the way home, we made up games with sticks and rocks, throwing them — not at anyone, of course.”

Setting down their lunches, students would start the day with the Pledge of Allegiance, songs, and Bible readings. “Friday was Bible quotation day,” recalls Mary Doyle Brown, the only living retired teacher of the county’s one-room-schoolhouse era. “We’d sing ‘Row, Row, Row Your Boat,” “America,” or “My Old Kentucky Home.”

“It got us relaxed,” says Bartley.

“It could be a challenge sometimes,” recalls Brown of teaching eight grades at once, “with some students, anyway. But you’d have one class at a time come up front to the recitation bench, and the younger ones that were interested would listen, and the older ones could review. So you heard the lessons every year.”

Before 1838, the only schools in Kentucky were “subscription” schools, meaning that each family paid tuition by the month. After the state established funding streams and mandated the establishment of trustees and local commissions that eventually evolved into school boards, “colored” schools like the one at Mount Vernon continued to operate on subscriptions — and continued to use the “blab method” of instruction, in which everyone in the building responded to the teacher’s questions in unison.

Getting an education in those days took considerable determination, especially past 8th grade. “You had to make a certain grade on a test at the end of 8th grade,” recalls Bartley. “I went to high school between 1934 and 1939; I actually quit for a semester, and my parents didn’t care, but my sister — she had traveled a bit — insisted I go back. In the winter, we had to rent a room in town so I could get there. Daddy had a store in town at the time, and he made some kind of a deal.“

“A lot of people didn’t go on to high school, and some just went whenever they could,” recalls Bartley. “Big farm families had so many chores to do to survive.”

Retired teacher Willadean Carter has made it a mission to preserve the heritage of Monroe County’s one-room schools. “I saw so much legacy that I felt needed to be preserved,” she says. “I went to the Monroe County Retired Teachers meeting and told them my dream of preserving a building. We needed money to do that, so we decided to put all the information we could collect into a book.” Retired teachers jumped in to help, organizing information and locating old pictures; the book, “Early School Days in Monroe County,” sold over 1,000 copies. “We had some people that knowed what to do,” observes Bartley drily. (Plans are in the works for a second book..) 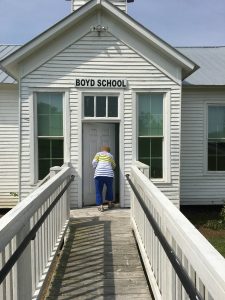 Then the call came — there was an old school in the Boyd community that might be available. “We dropped everything and went to look. It didn’t look like much,” says Carter. (Brown laughs.) But the owner, a man now living in Indiana, said they could have the building, so a new round of book sales, commemorative brick subscriptions and cornhole tournaments began to fund the relocation and renovation, and the school board voted unanimously to allow the Boyd School to relocate just south of the middle school. Ribbon cutting took place in 2009.

“The school board had a big party,” says Carter. “There were two teachers still living. We recognized former students…We had another big party for the centennial in 2014. We’re so proud to have preserved that school — it touched so many families in Monroe County. One man came from 2,000 miles away. He was on oxygen, but he still wanted to come back to school.”

Today the Boyd School is meticulously restored, complete with desks refinished by MATC students, recitation bench and black chalkboard, emblazoned with a long-gone teacher’s motto, “Let us try to do better each day. Pupils be kind to each other.” 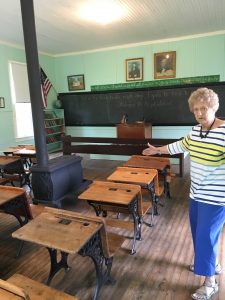 Willadean Carter in the classroom at Boyd School.

One-room schools reigned in a Monroe County where a first-grader who took a wrong turn and went downhill instead of up became a local legend, “Ezekiel Harlan was teaching,” recalls Bartley. “The boy’s older brother looked around and couldn’t find him — he’d got confused. He went down the hill by Willy MacMillan’s. And all Willy could get out of him was that he was ‘Pappy’s boy.’ Willy brought him back on a mule.”

One-room schools, by all accounts, gave the kids a solid grounding in the three R’s while allowing for a kind of social and emotional bonding that even the best-intentioned consolidated school can’t quite equal, much less beat.

”It really was like a family,” says Brown. “I remember the big pie suppers, the fundraisers. The kids decorated boxes for the pie auction. The neighborhood boys would bid on a certain girl’s productions, or set up two other boys to bid against each other.” 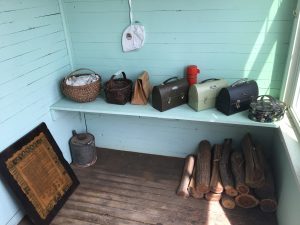 The basic certification for teaching rural school wasn’t hard to get back in the day, but Monroe County’s teachers were always hungry for self-improvement, taking correspondence courses, car pooling to WKU, getting trustees to pay summer school tuition. “Tompkinsville High School existed before 1908 — we had been an independent district since the late 1800s, and the Monroe Normal School was established in Flippin somewhere around then, to train teachers,” says Carter. “They were on the ball from the beginning, wanting the best for the kids.” 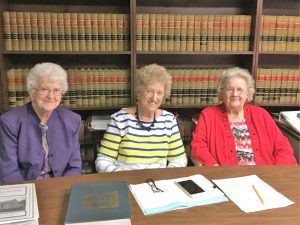