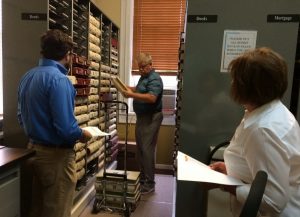 Ward, Meador, and Chaney in the record room selecting books to be transported for preservation.

By PJ Martin, The Herald-News

“We aren’t moving yet,” is what Metcalfe County Clerk Carol Chaney said Thursday morning, as people strolling by  noticed record books being carted to a waiting van on the square in Edmonton.

The historic records were being transported by Kofile Technologies to be digitized at their Greensburg, NC location. Digitizing records eliminates the need to thumb through the books causing them damage, thus helping preserve their history. When finished, it will make it easier to access deeds and marriage records online on the county clerk’s website.

In March, Chaney received notice that the application for the Local Records Program grant in the amount of $41,616 from the Kentucky Department of Libraries and Archives had been awarded to the Metcalfe County Clerk’s Office. The sole purpose of the grant is to preserve documents held within the older books located in the clerk’s office.

According to Gerald Ward, Conservator and General Manager of Kofile Technologies, who was on site Thursday, it will take about four weeks to get the work completed and return the records. During that time, the records are under extreme security. Cameras, guards, and even a vault are used to safeguard materials the company is working with.

“You have access to your records the entire time,” stated Rick Meader of Kofile Technologies who went on to explain that if  anyone comes into the clerk’s office needing information, while the records are off site, that is not an issue. The clerk is given a contact number and email to notify workers at Kofile who immediately retrieve the requested information and send it back within one hour.

Kofile is a Texas based company which has specialized in the preservation of legal and historical public records for the past four decades and has locations in Texas, Vermont, Georgia, West Virginia, and Nevada. The Greenburg, NC facility, where these records are being taken, is a 14,000 square foot facility with 16 technicians stated Ward.

The preservation process is extensive. Each document is surface cleaned, deacidified and mended. Any adhesives or non-archival materials are removed, and the sheets are encapsulated in archival polyester, which will not yellow, become brittle, or react with the ink. It is estimated that restoring documents this way can preserve them for as long as two to three hundred years. 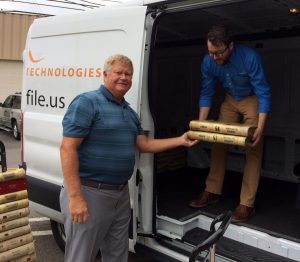 Rick Meader and Gerald Ward of Kofile Technologies loading records into the van fortransport to the facilities in Greensburg, NC. 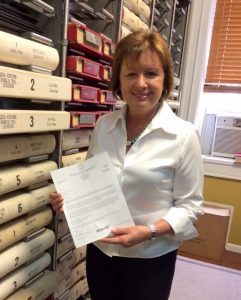 Metcalfe County Clerk Carol E. Chaney holding the letter she received from the Kentucky Department of Libraries and Archives awarding the grant.