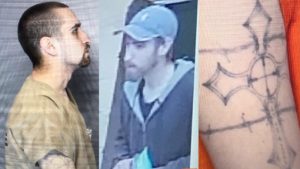 PHILADELPHIA – The U.S. Marshals, FBI, and U.S. Secret Service are asking for the public’s help in locating a Pennsylvania man wanted for threatening the president and other elected officials.

Shawn Richard Christy, 27, also has multiple state arrest warrants in Pennsylvania for burglary, probation violation, and failure to appear for an aggravated assault case. Christy has threatened to use “full lethal force on any law enforcement officer that tries to detain me.”

A federal warrant was issued June 19 for Christy in relation to Facebook threats to the Northampton County district attorney, stating, “Keep it up Morganelli, I promise I’ll put a bullet in your head as soon as I put one in the head of President Donald J. Trump.”

On Thursday, August 2nd, a 2012 Toyota Tundra was stolen in Poca, West Virginia. That vehicle was recovered Saturday night in Greensburg, Kentucky. Federal agents are considering Christy a suspect in this vehicle theft because Christy is believed to have abandoned a stolen 2008 Dodge Caravan in Nitro, West Virginia on Tuesday, July 31st.

The U.S. Marshals have been attempting to capture Christy, who is 5 feet 10 inches tall, weighs approximately 160 pounds, is a white male with a light complexion, has a tattoo of a cross on his right upper arm, short dark blonde hair and a beard. Christy also speaks with a noticeable lisp and claims to be a survivalist. Christy is from McAdoo Pennsylvania.

Federal Agents are offering a cash award of up to $15,000 for information leading to the direct arrest of Christy. Any information will be considered confidential. Persons having information should contact the U.S. Marshals at 1-877-Wanted-2 (1-877-926-8332) or the F.B.I. at 215-418-4000. Christy should be considered armed and dangerous, individuals should not attempt to arrest Christy themselves.