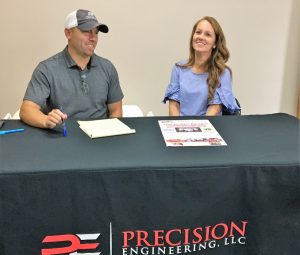 It’s been a good couple of years for Precision Engineering, and for Steve Harris, Principal Engineer, 2018 has been the most outstanding yet. In April he married his lady love, the former Lesley Hale, who’d left her job as Tompkinsville’s City Clerk to join him at Precision as office manager. On July 6, Precision submitted a detailed 20 year Regional Facilities Plan for the City of Tompkinsville’s Sanitary Sewer System. And 2018 is the year in which Precision is stepping up to the plate for the community’s hungry children, taking sponsorship of the Fourth Annual Pull to Feed the Kids Truck and Tractor Pull in ways that are calculated to put the October event firmly on the regional map and ensure that Monroe County’s BackPack Program is able to feed every last mouth.

Ever since hearing about the BackPack Program, which works with Feeding America’s Heartland – Elizabethtown to provide kids in need with a backpack full of food every weekend at a cost of $120 per child per year. Harris knew he wanted to help.

“Coming from where I come from, I can relate,” he says simply. He doesn’t want to go on and on about it, but growing up in Knott County wasn’t an easy ride. “It’s over in the southeast part of the state, coal country, and all of my family were coal miners. It’s a really poor area — it has been for a long time, and now that coal is gone it’s worse.”

He credits his grandfather (“He treated my grandmother like a prize”) and a few other positive thinkers with helping him find the gumption to get up and out and to UK, where he graduated in 2004. “I couldn’t have been anything but an engineer,” he says. “Math and science was always my deal. It’s who I am.”

Harris was using his engineering degree to do mining permits, and didn’t see much of a future in it, when someone told him about a pleasant little city about two hundred miles west where a good engineer might find himself welcome. He pulled up stakes and moved to Tompkinsville in 2013 and formed Precision, and the company hit the ground running with projects in spring 2014.

Today, Precision is a multidisciplinary civil and geotechnical engineering, surveying and construction inspecting consulting firm with clients in seven states. Between them, the Harrises have an impressive array of experience, education and certifications, and the company employs a team of six well-qualified professionals. And the recipe for growth is simple yet profound: faith, honesty, integrity, courtesy and hard work.

It was in 2015 that BackPack Program coordinator Carolyn Emmert popped in asking for a donation. Harris had never heard of the program before, but he was immediately on board and wanted to find a way to do more.

“When Dallas Carnahan came to us and wanted a little help with the truck pull, it all came together,” says Lesley. “Their vision and ours line up really well. So we’re doing the marketing and advertising, and sponsoring the prize money so that every bit that’s raised will go to the kids.”

“It’s nice that people sponsor athletics,” says Steve, “Coming from where I come from though, that wasn’t even any part of the picture. I believe there are children out there that don’t have anyone, and this is a way all of us can help. We can’t fix the whole world, but  we can help the locals here.”

Clearly, Harris has found his heart’s home in Tompkinsville.  “I love it here,” he says. “Coming from where I come from, it’s a big town. We’ve been able to build an amazing team of good technical people here. And I’ve gotten to meet so many who really care. Amy Thompson, Darren Cleary, Joe Finley, Marty Milan, Andy Bushong, Mitchell Page, Scotty Turner, Bob Greer, Bart Rowland, Steve Hagan — they’ve all been influential in helping get Precision where it is.”

To celebrate love and good fortune, the Harrises have kicked the Pull to Feed the Kids up a few notches, establishing six classes that are sanctioned by the Kentucky Outlaw Truck and Tractor Puller’s Association, meaning that the Monroe County event will likely draw 70 to 80 entries, and sponsoring two additional classes themselves as a personal donation.

“I knew nothing about truck pulls,” Lesley confesses. Marketing, however, she knows a good bit about; besides being promoted all over the region at KTTPA events and on the official website, she’s leveraging internet, social media, print media, and signs, from posters to electronic billboards. The event flyer had been viewed 10,000 times online by July 12. 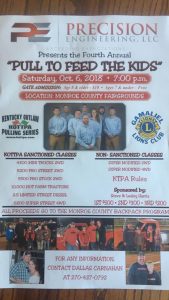 “When we came up with the idea, I talked to all my guys, and every person in the company is in,” says Steve. “And their wives and families,” Lesley adds. “Who knows what we’ll do next year? This is going to be fun.”

“If I could pass something besides food to the kids,” says Steve, “it’s this: You have the choice. It’s not about who or what your parents are or how much money you have. What do you want to do? Who do you want to be? I’d love to pass on the confidence to them, so they know that they can grow up and do that good thing.”

Which is certainly easier on a full stomach.

For information on the Pull to Feed the Kids, which will take place on Saturday, October 6 at the Monroe County Fairgrounds, contact Dallas Carnahan at (270) 427-0792.