Celebrating a tradition that just keeps getting better

In times when fabric has been scarce — before it began to be manufactured in the US, or during the Great Depression — quilting has been a necessity. Not a scrap should go to waste. In better times, quilting is a relaxing hobby and an art form. It declined for a while in the mid-20th century, when shiny new expensive status symbols were in vogue over heirlooms, but the back-to-the-land ethos that followed saw many a younger soul try her hand at a quilt.

In Monroe County, quilting never went away. This is a culture where most appreciate heirlooms and careful, hard work over shiny new things anyway. And now, in 2018, quilting is a year-round art form — and on the second weekend in June, it’s a celebration.

Organizers decided to go bigger this year, inspired by a quilt festival they’d visited in Algood, Tennessee. In addition to the quilts displayed and activities in progress at Old Mulkey Meeting House and State Historic Site, in addition to the Drive By Quilt Hanging happening across Monroe, fourteen specific satellite locations were arrayed in stunning quilts. Seven restaurants, a church, Signature HealthCARE, the Extension Office, the Jackson House of Gamaliel, the Germany Church of Christ, and two stores (Family Circle Clothing and Robertson’s Decorating, both of which were in it up to their eyebrows as event sponsors anyway) opted to be part of the Quilt Trail.

On Saturday, Wayne Robertson is filling in at the decorating shop for Debbie, who was over at Quilt Central, Old Mulkey Meeting House. He’s very much in the spirit of things, happy to play tour guide among the 56 quilts (“More than I thought we had,” he says) on display. 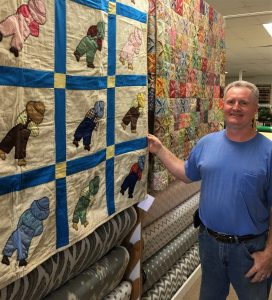 “This pattern is called a cathedral window,” he says. “And this one here, my great grandmother Mary Lou Toombs made for me when I was born. She worked at one of the sewing factories and brought scrap squares home to make her quilts.”

Over at Old Mulkey, the Quilting Olympics is wrapping up with a needle threading contest. Absolutely no one is shocked when master seamstress Carol Wheeler prevails, as Wheeler is already known to be in a class of her own in these matters. Visitors wander and gaze and learn things they didn’t know. 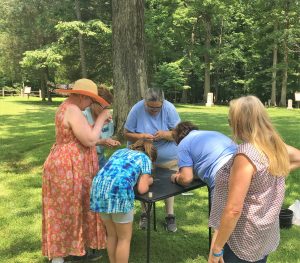 Needle-threading at the Quilting Olympics.

Sharon Crawford and Judy Scott are here representing the Kentucky Heritage Quilt Society. They’ve been at their booth all morning, and now are grabbing a moment to look around. “This is just such a beautiful venue,” says Scott. “It’s the secret jewel of Tompkinsville.”

The Heritage Quilt Society, with 700 members, is located “everywhere in Kentucky.” The Piecemakers Quilt Club of Monroe is a member guild. And there’s no end to the places that are thrilled to have a good quilt. Members supply “Quilts for Cruisers” to the Bowling Green police, so that when an officer has to comfort a child, there’s a quilt ready at hand. And they’ve made 300 for the Center for Courageous Kids in Scottsville. “They told us the kids go room to room when they get there until they find just the right quilt,” says Crawford.”There’s something very comforting about quilts, and about the act of quilting.”

It’s still largely a woman’s art, although Crawford says the Guild has “a few” guys, who tend more towards freeform than original projects. 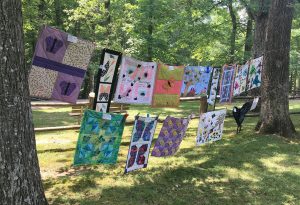 Entries in the Quilt Square Contest.

Crocia Roberson of Winchester, Tennessee has come to represent the Tennessee State Button Society. Just looking at her container of all types of vintage buttons takes you straight back to Grandma’s. But Roberson has more to offer: A retired 4-H agent and vintage toy collector, she is a mistress of string games and tricks, beyond Cat’s Cradle into Jacob’s Ladder and how to turn it into Grandma’s Bra and Grandpa’s Britches. “Wonderful event,” she says, flexing her nimble fingers. “So many people have thanked me for coming. We don’t often get that. But I did talk to about 2000 people at Pigeon Forge, and 70 percent said they had old buttons at home. And they all said they were going to go home and take a closer look at them.”

Hostess Sheila Jobe Rush is going from booth to booth taking orders for Dovie burgers. (Dovie’s is a satellite location.) Her sister Sharon  is helping man the Friends of Old Mulkey booth, where fabric can be purchased for future projects. 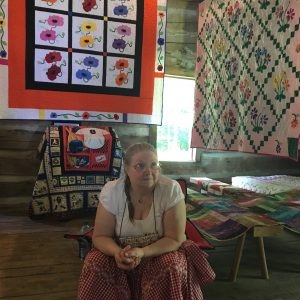 Inside the Meeting House is the featured exhibit, courtesy of the Nimble Thimbles of Indiana. Nimble Thimbles Vice President Cora (Crawford) Beasley grew up in ‘Roe and visits often, and Rush has leveraged that connection into a stunning display: the Thimbles have driven about four hours, bringing with them almost 70 quilts and an array of blocks, wall hangings and pillows. There is a quilt hand-sewn of blue jean scraps (made by a nephew!), a UPS-themed quilt made for a delivery man, a wall hanging made from ties. The Thimbles are definite on one thing: Just because a quilter avails herself of an embroidery machine doesn’t mean less respect should be given. It’s still work, involving many, many changes of thread and the meticulous piecing together of endless squares and shapes. And John Mulkey’s old Meeting House is resplendent with results.

At the Extension Center, WKU Kentucky Museum collections curator and associate professor Sandy Staebell is explaining quilt lore to an audience of over a dozen, while other visitors explore the 70 quilts on display. Monroe County Extension Homemakers President Brenda Turner, a quilter herself who will be presenting her work in Sunday’s planned Trunk Show, says about 35 people have come through so far. “I just love this,” says Sarah Armfield, owner of Valerie’s Quilt Corner in Scottsville, a mother/daughter operation. “It’s so well organized, and the people speaking with us at each location have been so knowledgeable.” 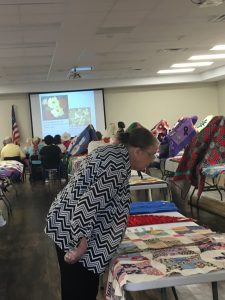 Monroe County’s Extension Homemakers had 70 quilts on display at the Extension Center, one of 13 satellite locations in this year’s festival.

Turner tells me she stopped at Signature HealthCARE and saw yet another amazing array — and witnessed a resident, a man, working on some quilt squares. “He was very focused,” she says. “Somebody pointed out his work and said, ‘these aren’t very good,; and I said, ‘Oh yes they are. They’re beautiful.”