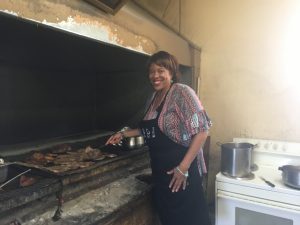 Along with quilting and rolley-hole, barbecue is one of the arts that puts Monroe County squarely on the map of excellence. On a summer afternoon, the fragrances from the smokers and kitchens waft around Tompkinsville promising delight. And no barbecue is more iconic than the one down at the corner of Second and North Jackson, where Anita Hamilton Bartlett and her crew cook up a storm at R&S.

The only black-owned restaurant in Tompkinsville is also the only place in town to have made it onto a food critic’s ten-best list. In 2016, Southern Living magazine named R&S one of “10 Must-Visit Kentucky BBQ Joints.” Bartlett smiled — and kept right on cooking.

“I’m so blessed,” she says. “I’ve been here 28 years now, and I may not have gotten rich, but I’m rich in health. And in interesting people.”

Bartlett grew up in Tompkinsville in the “Kingdom.” “I have so many great memories from the Kingdom,” she says. “There were six of us, and we’d fight to get on the summer work program, because they could only take two from the same family.” Bartlett worked in one of Tompkinsville’s sewing factories as a younger woman, continuing to pull a 6 a.m. to 11 a.m. shift even after she and her husband purchased the former Tooley’s in 1994.

She knew where to turn to learn recipe secrets. “I’d never really cooked,” she says. “My grandpa just laughed at the idea. But my uncle Tom Evans taught me what he knew.” Evans’ expertise had its roots in still earlier generations. “The sauce was handed down since my great grandma, Lucy Evans, used to cook it for the slavery camp in Cave City,” says Bartlett. “She taught Uncle Tom. If you want the real great stories, talk to Bev McClendon some time. His family used to own my family; we go way back.”

Bartlett’s ability to discuss this history and the not-so-distant era when black Monroe County children had to travel to Glasgow to be educated past elementary school without so much as a flicker of resentment is stunning to Irish Yankee ears, in a way that seems to offer more genuine hope for racial reconciliation than many, many developments on the national political scene. Not that she’s into taking anybody’s nonsense. “There’s a place in Columbia where my brother was working; he bragged on the food, so we thought we’d give it a try,” she says. “We got ignored; we had to seat ourselves. Hmmm. What’s wrong here? We won’t be back. As someone who runs a business, that’s just stupidity.” 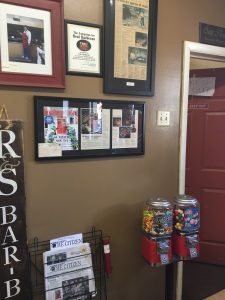 Over the decades, she’s gotten quick to recognize — and ignore — any such reaction from customers. “Architecture-wise, this is a hole in the wall place,” she says, “and sometimes people come in, see that, and then it’s like I can read it in their eyes, ‘Oh. She’s black. I don’t know about this.’ My goal is for those people to feel as welcome here as anybody.”

This is one lady who’s been through the fire and learned to use it well. “In 2001 my children’s father died, and it was a very bad time,” she says. “Lost this place, lost our home. I couldn’t eat or sleep for a while, and my daddy, my angel, was sick. It felt like I was falling apart completely, but coming out of it made me stronger, and the blessings came after.”

Bartlett spent two years lying low and saving money, and in 2003, when the building came up for sale, “I went to the courthouse steps and bought it back. A lot of good friends helped me. Ever since, I’ve just been doing the best I can. I believe in treating people the way I want to be treated.”

Part of that walk has been serving the city as Tompkinsville’s first black elected official. “It was suggested to me, and I got to thinking, and I liked the idea. Then I wasn’t going to run again, but a couple of gentlemen told me ‘You are what the community needs.’ I’ve grown in the years; I’ve learned a lot. I am a churchgoer and absolutely a believer, and some things I do for my daddy; he was a well respected man. Who knows, maybe I’ll run for mayor eventually.”

For now, she’s getting ready to feed the multitudes at this week’s Lite Up The ‘Ville bash in City Park. Food critics and wandering journalists of various descriptions come and go and are fed like anyone else; the weeks have a rhythm: slow on a Tuesday, building through Wednesday, frantic during Thursday’s chicken special, and out-of-towners on weekends. “Word of mouth is strong,” she says, “both around here and online. I know there’s another barbecue opening and it’s all good, I just make sure everything’s good over here, you know? Because Daddy was right, it’s not the quantity, it’s the quality.”