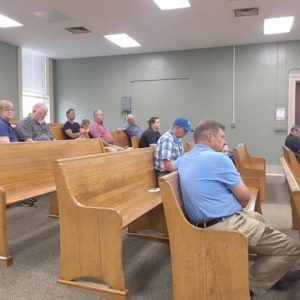 The Lincoln Volunteer Fire Department had two bids from Sunbelt Construction and C & C Contracting. Both of which were rejected because the budget didn’t allow for the $700,000 bids. The fire department will be asking for an additional $200,000 grant.

The fiscal court approved the purchase of a 2005 Chevrolet Truck for Parks and Recreation for $3800.

Ray Page, supervisor of the Edmonson County Road Department reported all paving is done. County mowers finished up on the south side of the county on June 2 and have been on the north side since June 14.

Shane Doyle, Edmonson County Sheriff, reported that they are continuing with their regular drug bust and said they were having great success. A new deputy, Devin Lindsey, was sworn in and Probation and Parole officer, Josh Watt was presented the Carnegie Hero Medal.

Park Mammoth has requested that the lawsuit be dismissed after further investigation it was found that they were paid up till June 30, 2018. No action will be taken on that til the next fiscal court meeting.

The court approved CDL physicals to be done at A+ Plus Family Healthcare Clinic, Brownsville at $95 per physical.