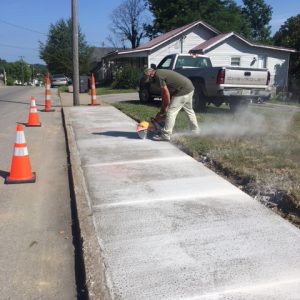 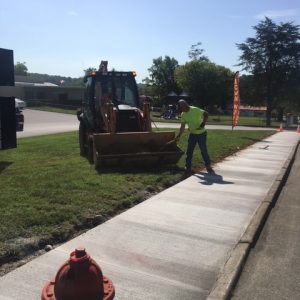 The work on the sidewalk in front of the Main Street Activity Center began early on June 18.  Kenneth Cowles Concrete was in charge of the pouring and finishing of the concrete work. On June 20 they were putting the finishing touches on the sidewalk. Scott Cowles, one of the companies‘ employees, cut the drain lines into the concrete and two of the Brownsville City employees, Jerry Spainhoward (in backhoe) and Roger Parsley (with the shovel) were busy finishing the landscaping and fill in around the new sidewalk. The sidewalk was starting to get really bad in that area so some of the LGEA/MRA funds that were set aside were put to good use for the residents of Edmonson County.