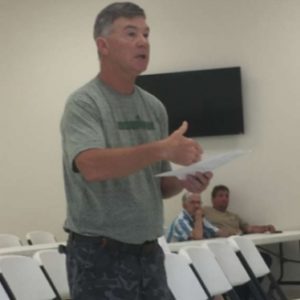 Jim Green spoke on behalf of the Morgantown Utilities Commission the cost of day-to-day operations. Also discussed in the meeting was an increase in rates.

The Morgantown City Council met during the regular session on June 14. One of the hot topics discussed was the crime in the city. Morgantown Police Department has hired two additional officers for the force, RT Cox, and Charles Dauley. For May the police had 284 dispatched calls to service, worked eight accidents, issued 23 citations, and had 919 total calls for service.

Morgantown Police Chief Giles Taylor said, “we hired two new officers and created the new room to fill remaining positions throughout the rest of the year. Crime is relevant to the number of eyes watching it. The more people working, the more eyes are watching it.”

Morgantown Mayor Billy Phelps added, “the department got down to two officers working 12 hours a day for seven days a week for about two and a half months. They did an outstanding job. To have the people we have, we have a very low crime rate. I contribute a lot of that to that we do respond quickly. We are still a town that supports law enforcement.”

Taylor added, “saturation control has a lot to do with that.”

Mayor’s update – The Kentucky League of Cities conference will be Sept. 17. Twenty training hours are available. The blacktop work is well underway. The crew has been busy working on roads around downtown Morgantown. The ARC bridge is completed.

“We have been praised for the Sidewalk To School project,” Phelps said. “We have kind of hit a snag. The state doesn’t hold right of way on the side of the roads. We are still looking into it.”

The Dive In at the Movie will take place at the Morgantown City Pool on June 20, July 20, and Aug. 1.

“It was a major undertaking (to have the movie held elsewhere),” he said. “We decided to have it held up here, is that people are at the pool already. I talked to the head of the pool and thought it was a great idea.”

The city is working on curbs getting fixed downtown. The new tax bill came out. It involves having to charge tax to anybody that goes into the city pool. The city has decided to eat that tax not to hinder visitors to the pool.

Planning and Zoning – the department has had different people changing the zoning on their property. That speaks well to the city. P and Z are working with the process on a modified zoning map. They have another work session planned. They sent the final information to the city and the next step is to work on a comprehensive plan.

Housing – the group has begun full speed with the summer requirements. This includes property and building upgrades with mowing, trimming, turnover move outs, and new lease up. The Housing Authority is fully occupied and has continued to address applicants for housing requests. The end-of-year financial report has been submitted to HUD. This shows a good year ending March 31. The group is in the process of discussing the parking lot resurfacing at the Southside Community building, which is provided for the Boys and Girls Club to use. A video for security has been installed and is being utilized at the building. The Housing Authority had six high school graduates that were recognized during the last meeting.

Utilities – Jim Green said the department has had two meetings since May. He briefly spoke about the increase in water and gas rates. They will be raising a total of five percent. The water rates are still lower than Butler County water. Green said they are trying to be proactive and keep moving forward while maintaining the comfort of keeping expenses low.

The funds’ increase will help fund gas-line extensions – Mooretown Loop is next in line starting in the fall of 2018, help with water project improvements, and maintenance projects for the water plant. The Utilities Commission is committed to providing affordable utility services to all customers.

The second reading of the budget was approved for the 2018-19 budget year.