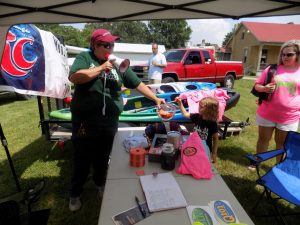 A record number of participants enjoyed a day on Green River, during the annual Green River Ramble on June 2. An estimated over 80 people signed up for the excursion. Several paddled from Reedyville to Woodbury, while others paddled from Woodbury to Aberdeen. An additional few paddled both legs of the tour. The Morgantown Trail Town Task Force is to thank for hosting the event.

Melanie Hunt with the Task Force gave some additional background on the success of the organization thus far.

“We have all the paperwork we need now (Trail Town designation),” Hunt said. “We need to have a training meeting. The City is helping us coordinate this. It will be a hospitality training for the public. They will bring in people to teach you how to react in various situations. We want people to be able to answer questions on what is available in Butler County. We have met with the Arts Guild already and are going to meet with the Department of Agriculture and want to include them in the efforts with Trail Town.”

She added, “I hope by end of the summer that we may hear something about a designation. Once certified, any events we have will be posted on the website by the state tourism board. They will help by notifying more about what is coming up for Butler. It is almost like an accreditation. You have to maintain this every year.”

There is an action list of things that need to be done, want to do, and plan to do. It is a growing document on the progress of the Task Force. The benefits are endless as far as tourism goes for the area.

Two kayaks were given away at this year’s Ramble. The 18-mile paddle took place on some of the most beautiful sections of Green River. In addition, the live entertainment for the day was Collin Coots, Kenny Johnson, and the Mudd family. The event was held in conjunction with the Green River Museum opening.