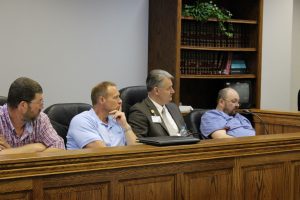 Barren-Metcalfe County EMS Director Charlie O’Neal proposed changes to the by-Laws to his board of directors on May 23 that was finally approved, but not before a lengthy discussion, amended actions, and a tabled motion to come back to the issue later in the meeting.

Board Chairman Joe Middleton made a motion, seconded by Barren Judge/Executive Michael Hale, to amend the proposed language that would add the City of Glasgow back to the deficit allocation in the event that Barren’s Ambulance Taxing District defaults on payment (which was removed mid-March then rescinded to add City of Glasgow back in two weeks later). Wednesday’s proposed by-Laws did not list City of Glasgow, but instead, 60-percent combined from the Special Barren County Ambulance Service Taxing District with payment obligation reverting to the Barren County Fiscal Court.

Since the previous by-Laws did not recognize the Special Barren Taxing District, the previous approved allocation of 30-percent City of Glasgow and 30-percent County of Barren was combined into a 60-percent shift, O’Neal said.

Glasgow Mayor Dick Doty questioned Middleton’s move. “We know the ambulance taxing board is not going to be able to pay 60-percent of the deficit and the county is going to have a difficult time fulfilling the remainder of the year,” Middleton said. Doty said the original language isn’t logical to begin asking the residents of Glasgow to pay up to four times as much. Middleton said he didn’t argue that stance, but as a taxpayer of Barren County, he is trying to protect the County of Barren. Chair Middleton yielded the motion to newly elected Vice Chair Scott Young, who was elected earlier in the meeting replacing Bud Wethington after TJ Regional Health declined to renew his CEO contract in early May.

Middleton’s move to add Glasgow back to the deficit allocation failed 3-7 with all board members voting against the addition except for Hale, Middleton, and Fay Neal who voted in favor.

Before the by-Laws were tabled earlier in the meeting, Edmonton Mayor Howard Garrett asked how that would immediately affect the current sitting board members since the proposed language shifted 6 positions to the County of Barren with appointment by the Barren Fiscal Court. It had the potential to immediately create four vacancies, three from the City of Glasgow and 1 from the City of Edmonton. The board discussed the legalities for this move before Councilman Wendell Honeycutt moved to table the motion until later in the meeting, which passed without dissent.

O’Neal proposed suggested language that would leave the current board membership and structure as is until Feb 1, which would be when the terms end anyway. A motion was passed unanimously to accept this amended language.

Finally, the new set amended by-Laws (including other changes) were adopted unanimously by the board leaving the new deficit allocation as a “20-60-20” proportion:

After Chief Financial Officer Steve Powell presented a nearly $4.85 million budget for the upcoming year, O’Neal said, “If you want BMCEMS to continue providing the same level of service it’s providing today, this is what it’s going to cost. If you’re ready to start making changes at the way we operate, no stand-by events, when trucks are gone, they’re just gone…even if that means patients have to wait for transfers, if you want to tell the city we’re not going to pay $192,000 for dispatch services anymore until there is a fair and equitable system put in place…then tell me what you want to do.”

Garrett said he is not in favor of the budget that leaves a $1,381,625 deficit; “I don’t know how many businesses can operate on a deficit with 1.3 million.”

O’Neal responded, “Tell me how to change the philosophy of the operation.” He said he can balance the budget, but he refuses to be the “sacrificial lamb on the steps of the courthouse” when residents are going to be upset with lack of ambulance services they are used to.

Finally, the motion was made to approve the upcoming fiscal year’s budget 8-2 with Wilson and Garrett voting against.

Metcalfe Judge/Executive Greg Wilson, an appointed member of the DAW, which was created by the board to facilitate with an auditor to determine cost-effectiveness and projection on future operations in March, announced that after a meeting with Taylor Polson’s Belinda Coulter, Coulter declined taking a position to conduct an audit. “It was disappointing for her to take this position since she’s been completing our audits for some time,” O’Neal said, “the CPA firm is not willing to do it, because they don’t feel they have the expertise to render appropriate opinions of the methodologies we use.”

O’Neal said ex-Vice Chair of the Board and by default ex-member of the DAW Bud Wethington met with Coulter without notifying O’Neal. He said Wethington “tried to convince” Coulter that the fair way to divide costs between the stations was based on run numbers and percentages. O’Neal said that is not a fair distribution of costs, because of the many things the agency does that are unrelated to runs, such as trainings, record maintenance, and the like.

Due to the ongoing discussion regarding the Ambulance Service’s expenses, O’Neal presented his board with a spreadsheet “to help alleviate the concerns some board members have.” The spreadsheet detailed exactly how every general ledger account number is divided or assigned.

Hale said he wanted to go on record that he is not in favor of hiring someone to do what can already be done. He added, “If I have to say it at every meeting, we hired this man (O’Neal) right here to do the job. We told him to fix it, we may not like the way he’s fixing it, but we hired him to fix it, and I stand by the director. We said we needed someone to run it like a business and that’s what he’s trying to do. I don’t like all his findings, but he’s trying to fix it.” Hale said it was time to “quit playing cat and mouse and do something.”

Middleton moved to table the review until the next regular meeting for the expenses’ ledger after the recommendation from Garrett that it needs to be “studied,” as well as the discussions to be held regarding the audit and O’Neal’s suggestion with Duke’s cost-sharing recommendations.

Deputy Director J.D. Walden told the board there is a “dire need” for more paramedics and referred to the situation as a “crisis.” Asked by Neal the reasons behind the lack of paramedics, Walden said there were multiple reasons, some being better benefits, “it’s hard to compete with other services in surrounding areas.”

Walden said he’s never seen the service have such a low number of paramedics in his 20-something years. “I’m for the people. I am for my employees. We have enough EMTs for the Basic Life Support (BLS) service, but not for the Advanced Life Support (ALS) service. I wouldn’t want that for my family,” Walden said.

O’Neal said some of the issues for the lack of paramedics revolved around “the lack of stability, lack of future direction, lack of inconsistent leadership…is causing our people to bail.” No actions were taken regarding the shortage of paramedics.

At the end of the meeting, Wilson made a motion to move into an executive closed session regarding “personnel issues.” No actions were taken upon the board’s return.

During public comments, Harold Stilts introduced himself as a Metcalfe County resident, but is also the Republican candidate for Judge/Executive in Metcalfe. “I’ve been concerned about the ambulance service for several months and for the residents of Metcalfe County to continue having an ambulance service,” he said. Stilts said he doesn’t know which direction should be taken but told the board a decision needed to be made “very soon.”

The next meeting is scheduled June 27 at 4:00 PM in the Barren County Fiscal Courtroom. 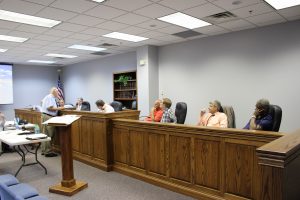