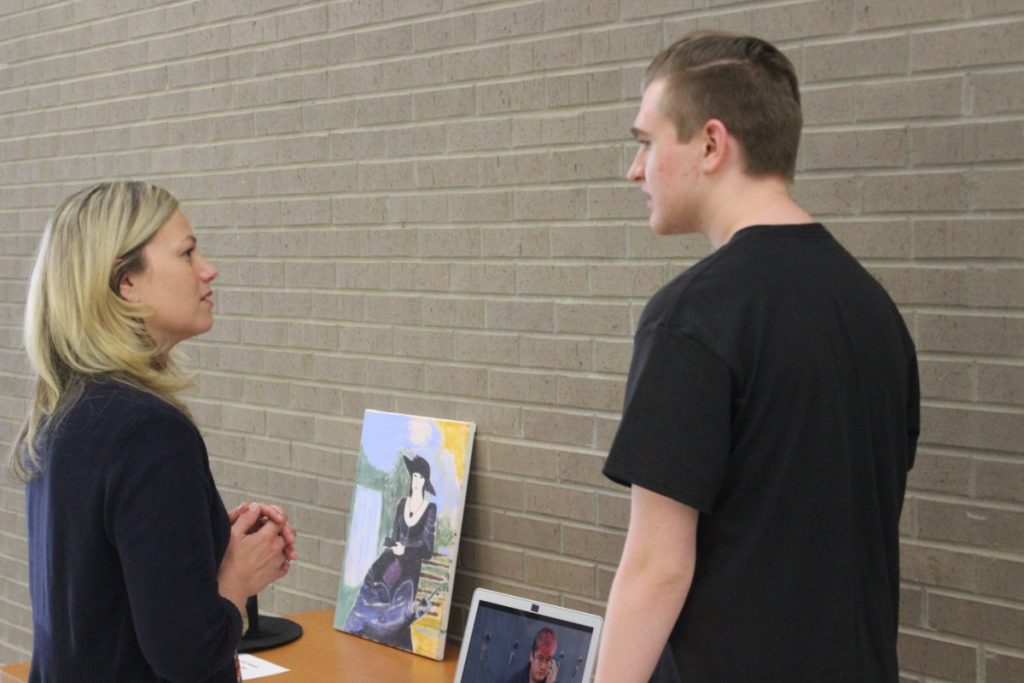 Pitcock discusses his work at the School of Innovation Showcase.

What Eli Pitcock saw happen to his friend Darby Clements in middle school got him thinking seriously about the subject of bullying. Needing a topic for his sophomore School of Innovation capstone project, Pitcock decided to craft a documentary on the topic, which has been much discussed in regional, local and national news in recent months.

Only three students came forward in response to his social media call for participants  Pitcock, and just about anyone else you ask, will admit that that number’s undoubtedly a smallish fraction of those who have at least some experience with the problem. But it’s a hard subject to talk about publicly, or even to one’s parents..For one thing, coming forward can make matters worse — a situation that the bullies of this or any other situation are only too happy to continue to promote.

Clements is one of the three who’s stepped up to confront the issue head-on, and recalls what happened unflinchingly for Pitcock’s camera. “In between seventh and eighth grade, I chopped off all my hair,” she says. “People spread rumors that me and my friends were lesbians..Things happen (socially) that go unnoticed and unmentioned.”

It’s this reluctance to talk that is the common theme of “The Modern High School — A Bird’s Eye View.” High schoolers, it’s pointed out, tend to respond to “How was your day?” with “Fine,” while adding a silent “Whatever.” Meanwhile, they’re navigating social waters that include not just hallways, cafeterias and gymnasiums but the multiple added layers of social media. Combine all that with the apparently instinctive status-seeking that preoccupies a certain percentage of kids at or just after puberty, throw in a competitive culture, and unkind things are likely to happen despite the best efforts of the adults in charge.

“Coming into high school is an adjustment,” observes Gracie Taylor in Bird’s Eye View. “People start to change; they’re becoming adults…some of them change into someone you barely recognize.”

Pitcock took about a month putting his documentary together, during a period that also saw stepped up security measures happening in Monroe’s school buildings. He’s hoping all the precautions don’t fall by the wayside as time passes. “When they first said no backpacks, people were upset, but the bag checks make a lot of sense,” he says. “But they get lax about it. They did start up again after the Texas school shooting.” As for the anonymous bullying and threat  tip lines students can use, he says, “people do use it a lot, but what happens as a result depends on what you put in there and who’s involved. It would help if whenever people see it happening they kinda just step up and stop it.”

“I don’t really have a good time at school,” says the third student in Pitcock’s documentary. “The social stuff, it’s just a lot of drama and stupid stuff that doesn’t make any sense.” He himself, he says, hasn’t witnessed any bullying drama but has heard of it taking place, and he has a suggestion: more room to breathe. “There need to be individual places for people to go,” he says. “More private classes, more separation.”

“Too many things,” says Pitcock at the video’s end, “get overlooked each day. Give it a thought. And if you know someone is having a hard time, help them.”

Documentary or not, it’s still not an easy conversation to have in Monroe County, and Pitcock’s well aware of that. “There was talk of showing it to the whole school,” he says. “I’m not too keen on that.”.