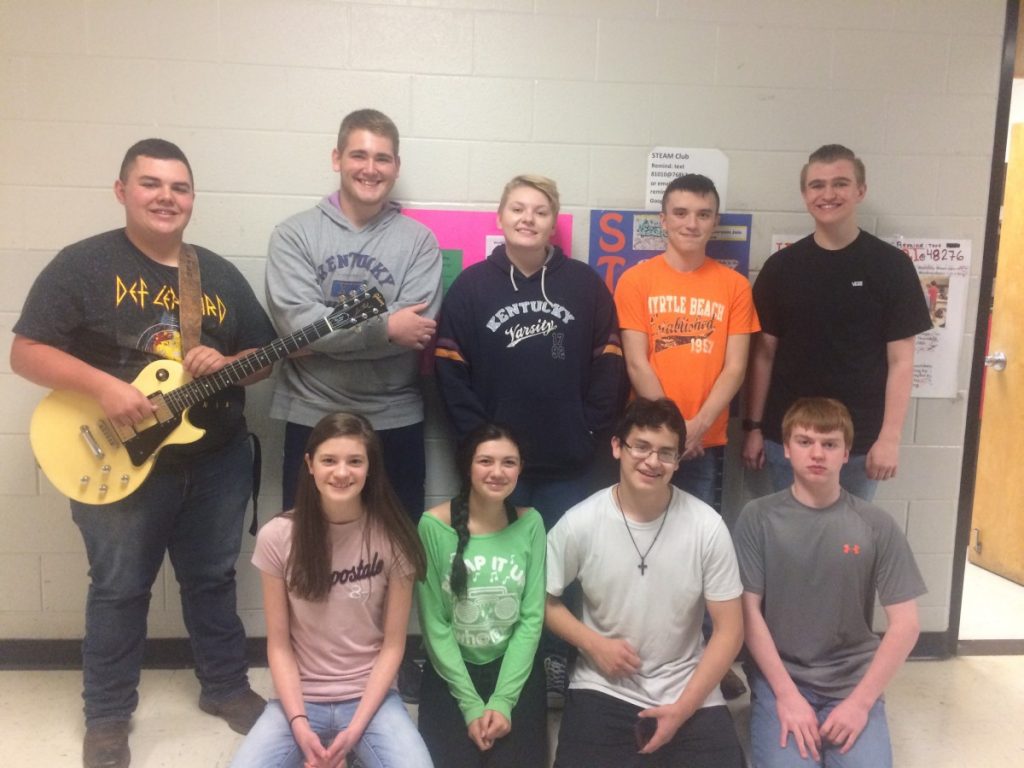 Entering the Monroe Area Technology Center for last Tuesday’s special called meeting of the school board, one was immediately engaged by an intriguing array of displays lining the hallway and the poised young scholars who’d created them. Monroe County teacher Sharon Froedge was determined not to let the projects undertaken by students in the International Club for WKU Glasgow’s Hispanic Cultural Festival, canceled this year due to budget cuts, go unseen. Combined with capstone projects from the School of Innovation and presentations from the STEAM (Science, Technology, Engineering, Art and Mathematics) Club,the result was a feast of creativity: the 2018 Showcase and Cultural Festival, Student organizers Kazalen Borders and Cody Peden scrambled (successfully) to get ready two days earlier than originally planned when the meeting was special-called for Tuesday, displaying their own genius of a kind that’s all too rare. Student Caroline Rushing handled planning and publicity, and Noble Steenbergen was official in-house photographer and reporter.

Sophomore Ryan Murphy, whose passion is auto racing, has designed an in-depth multi-media presentation on pit stop strategy as his School of Innovation capstone project. Artist Ivan Espejo has two very evocative paintings on display on behalf of the World Language Cultural Fair. Kalie Gentry has created a pencil reproduction of a mural by French artist Samuel Augustin. Sawyer Cherry has built and modified a Telecaster guitar from a kit he purchased with money earned from his own small business.

Brian Tandy has performed an in-depth analysis of local water quality, and has come to the welcome conclusion that a household filter brings it up to full EPA compliance and that it contains no excess lead, a worry in many other parts of the country. Makinzi Barnhardt, who’s taking accelerated studies in English, math, and foreign languages in hopes of attending Gatton Academy, has a project entitled “The Mathematical Modeling of Cerebral Hemodynamics and Intracranial Pressure.” I want to be a neurosurgeon,” she explains, “so I wanted to study the math involved.”

Skylar Smith, a student in the International Club, has made a colorful monkey dress patterned after an Oscar de la Renta design with roots in the Dominican Republic. “I like the lemur a lot,” she says. “My dad’s girlfriend used to be a designer; she suggested the Swarosky crystals. The whole thing took two and a half months to make, and many stabs of the finger.” Eli Pitcock has researched and produced a documentary on bullying. “The first step to fixing any problem is to admit there’s a problem,” he says.

Radford Chanse Page admits that computational complexity theory isn’t yet widely understood. “It’s a subfield of theoretical computer science,” he explains. “A lot of machines use it in coding. There’s no telling how far we can go with this.” To help illustrate, he’s using a chess probability problem.

There’s no telling how far any of these students can go with this. Froedge, who teaches French and Spanish as well as advising the International Club, the STEAM Club and the School of Innovation program, helped Monroe achieve District of Innovation status for the first time in 2016-17. The program is designed  to allow self-regulated, dedicated learners to get a head start on pursuing their passions through independent study while finishing high school. Students apply online in a rigorous process that includes essays and teacher recommendations as well as grades. Other programs represented at the Showcase, such as the International Club, require only that a student be interested, pay five bucks, and show up.

The school board meeting time is ending, and the students rapidly pack up their displays to head back to their busy lives. Froedge is a tiny bit wistful. It would have been nice to let these students present to a wider audience in Bowling Green, but at least some of the community got a glimpse of the fun.

“These kids aren’t required to take this on by anyone but themselves,” she observes. “All of these projects are in addition to their regular loads of schoolwork.”