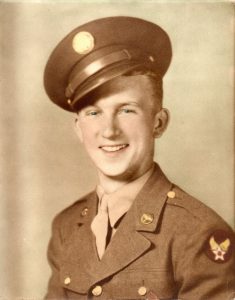 Memorial Day is set aside to remember the men and women who have given their lives for their country. Of course, its companion day for honoring our military personnel is Veterans Day, perpetually set for November 11, to recognize living veterans. Scattered across Barren County this weekend there will be hundreds of our heroes recalled in some form, whether by flags or flowers at their graves, stories told about their lives, some personal artifact pulled from a drawer or a photo in an album.

One of our local heroes who gave his life for his country was Willard Wallace Ennis who grew up near Lecta, the only son of Willie Albert and Bertha Williams Ennis. Like other youngsters in his neighborhood, Willard attended Slick Rock School; his mother also taught at the school.  After the 10th grade, he transferred to Hiseville High School from which he graduated in May 1942.

Like other young men and women, Willard sought a job and found one working in a store in downtown Glasgow before deciding to move to Louisville to work for the U.S. Engineers. The following year, on August 13, 1943, Willard enlisted in the Army Air Corps which trained him in aerial gunnery in Texas before sending him to join the 13th AAF in the Asiatic Pacific Theatre, arriving in June 1944.

The local newspaper, the Glasgow Republican, reported in November 1944 that Ennis had been promoted to Staff Sergeant. Just a few weeks earlier, on October 3, 1944, Ennis was part of a 10-man crew in which he filled the role of tail and belly gunner aboard a B-29 in the 370th Bomber Squadron.

On that fateful day, Willard Ennis’ squadron went on a bombing mission over Balikpapon, Borneo where they were attacked by Japanese fighters. Five planes were lost in the battle, one being Ennis’. 1st Lt. Warren McMillan was piloting another plane and saw a vapor trail coming from Ennis’ plane but he never saw the plane crash. The plane never returned to base.

Ennis is memorialized on the American Battle Monuments Commission’s World War II Honor Roll and the Tablets of the Missing in Action or Buried at Sea monument that stands at Manila in the Philippines. The Barren County soldier was awarded the Air Medal with Oak Leaf Cluster, the Purple Heart, the Asiatic-Pacific Campaign Medal with 1 Bronze Star, the World War II Victory Medal, and the World War II Service Lapel Button.

For years, Ennis’ parents held out hope that their son would return or perhaps be found as a POW. On March 15, 1946, the United States military declared Ennis dead, either Buried at Sea or Missing in Action.

When the couple bought grave spaces for themselves at Glasgow Memorial Gardens, they also purchased a space for Willard and purchased a plain marker for the spot. Years later, thanks to the tenacious efforts of his cousin, Roberta Sanders, a bronze military marker now memorializes Willard in his home county.

This weekend, pause for a moment and remember Willard Wallace Ennis and the sacrifice he made for all of us.