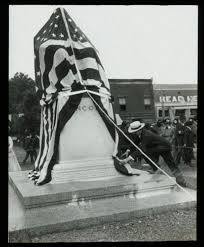 THE ABRAHAM LINCOLN STATUE about to be unveiled in Hodgenville on May 31, 1909.

In recent years it has become commonplace for many Americans to revisit the Civil War, its various causes, and the ways in which the event and people associated with it are remembered. Needless to say, the modern debate has been unruly, especially considering the event was over more than 150 years ago. Perhaps the best guide to acceptable behavior on the topic is the people who lived it and reunited as Americans. One of the exceptional examples of reconciliation occurred in Hodgenville, Kentucky on May 31, 1909.

On that day, an estimated 10,000 people gathered in the Hodgenville town square where nearly everything was swathed in patriotic bunting, bands played lively tunes, and a throng of children dressed in white sang “America.” While the scene was a feast for the senses, all attention was focused on an enormous lump in the middle of the town square. The center of attention was covered with a huge American flag, a reminder that our U.S. Flag Code wasn’t adopted until 1923, so using the flag in such a manner was acceptable at the time.

Beneath the flag was Adolph Alexander Weinman’s bronze statue of Abraham Lincoln. Depicted as seated in an Empire-style chair, the likeness of Abraham Lincoln rises six feet and is mounted atop a 12-foot pedestal. A 39-year old German immigrant, Weinman was also produced sculptures of Lincoln for Madison, Wisconsin, and the rotunda of Kentucky’s State Capitol. 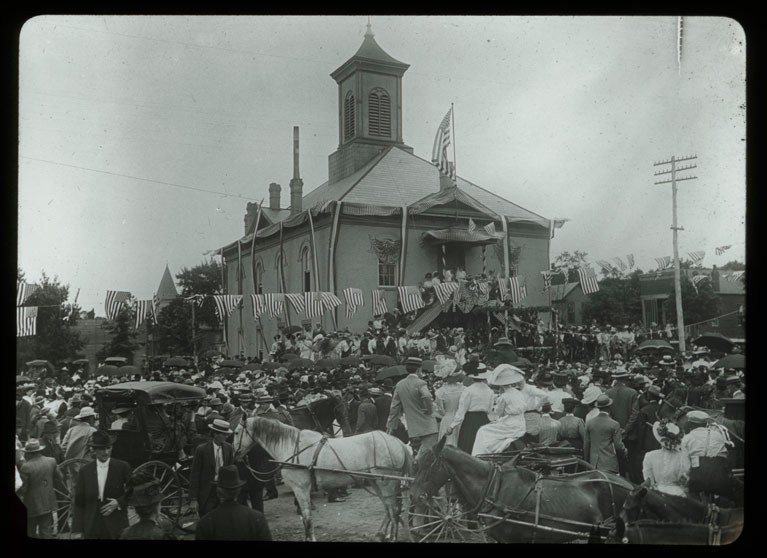 Soon after the turn of the 20th century, Kentuckians began thinking about commemorating Lincoln on the centennial of his birth on a farm near Sinking Spring about two miles from Hodgenville. Under the leadership of Otis M. Mather, the Lincoln Monument Commission ordered the statue in 1904. Congress contributed $10,000 to the project and the Kentucky General Assembly donated $5,000, but the balance of the cost was raised by the residents of LaRue County. Three months earlier, President Theodore Roosevelt had visited Hodgenville to lay the cornerstone for the Lincoln Birthplace Shrine, now a national park.

While the statue was the center of attention, the manner in which it was unveiled gives a glimpse back in time to the mood of the day. The sole surviving son of Abraham and Mary Todd Lincoln was present in Hodgenville, one of the few times he visited his parents’ birth state. It was intended that that younger Lincoln have the honor of unveiling the statue; instead, he asked his aunt, Emilie Todd Helm, to perform the task. She was assisted by her daughters, Katherine and Elodie. 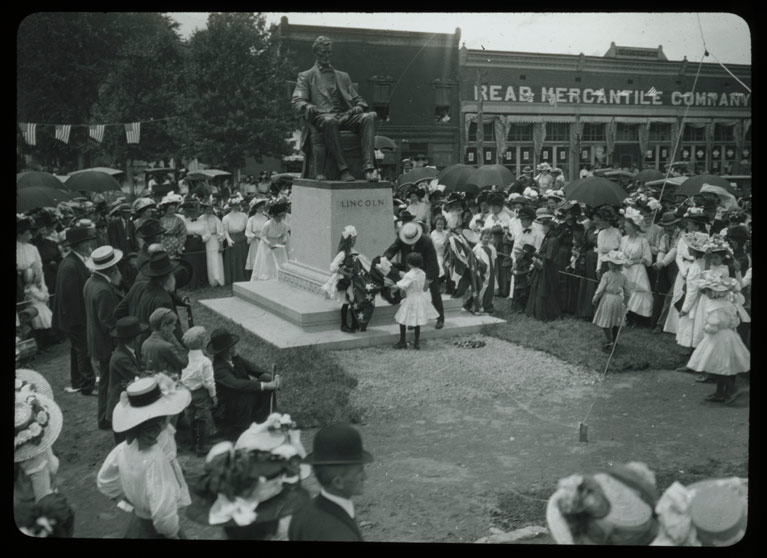 Of the thousands of people present, Emilie was perhaps one of the most unlikely people to unveil the statue. Emilie was a younger half-sister of Mary Todd Lincoln and referred to as “Little Sister” by the late president. As a young woman, Emilie married Benjamin Hardin Helm and the couple enjoyed a close relationship with the Lincolns. When the nation was torn asunder, Lincoln offered Helm a position as a federal army officer but Helm cast his lot with the Confederacy instead; he was mortally wounded at the Battle of Chickamauga in 1863.

At the Lincoln’s urging, Emilie and her young daughter Katherine arrived at the White House in December 1863 for a visit. Her presence and her defense of the Confederacy caused an uproar in Washington where she was labeled the “Rebel in the White House” by the northern press. While the adults were debating the war, the White House was filled with arguments between young Katherine Helm and Tad Lincoln over who was president – Abraham Lincoln or Jefferson Davis. 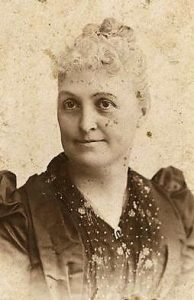 The stress of the situation led to Emilie leaving Washington with a personally written pass from Abraham Lincoln permitting her passage through the lines and the protection of her property – essentially giving her amnesty without taking an oath of allegiance. Back in Kentucky, Emilie south the president’s aid, writing to ask for clothing to be sent to Confederate prisoners of war and asking permission to cross enemy lines to sell cotton she had acquired. When Lincoln declined Emilie wrote back, “I have been a quiet citizen and request only the right which humanity and justice always gives to widows and orphans. I also would remind you that your minie bullets have made us what we are.” That ended communication between the Lincolns and Emilie and they never saw one another again. After the war, Emilie gave piano lessons and spent years recording the genealogy of the Todd family. Active in the United Daughters of the Confederacy, particularly a local chapter named for her late husband, she became a popular guest at Confederate reunions and came to be known as the “Mother of the Orphan Brigade.

Photos of the unveiling courtesy of the Library of Congress.