When I was growing up, I spent a lot of time on Peter’s Creek with my Daddy and my brother, Steve. Papa, Luther Garlin Powell, used to go with us until his health started failing. Shortly after my high school graduation in late May of ’73, I had a day off from Jr. Foods #4 and being a beautiful day, I decided to go fishing. Like always, I stopped in to check on Papa and Grandma before heading to the creek.

Papa said he’d help me dig worms, so we got a couple of cans and a pitchfork, then headed to where Grandma dumped scraps just over the fence beside the smoke house. That’s where we always found the biggest, juiciest worms, almost as big as night crawlers. We put enough dirt in the cans to keep the worms happy and soon had both cans full of the wigglers. I asked Papa if I could take the tractor down to the creek, he said I could, but he thought he’d just go with me. He said there was a particular spot he’d been thinking about and thought the bass ought to be biting.

We loaded our poles, tackle boxes and cans of worms onto the tractor, using grass string to secure them. Papa drove and I stood on the drawbar behind him, holding onto both fenders. Papa seemed to be in a particularly good mood and was talking and laughing all the way to the creek. As we dropped down into the bottoms, he raised the drawbar up so it wouldn’t drag and to “keep my legs outta the briars.” Those fertile bottoms had grown up thick with trees and brush ever since the government bought the bottoms for flood control for Barren River Lake, so we had to constantly duck limbs all the way to the creek. Papa pointed over to the bend he was heading to, saying there should be a deep hole there. While he had my attention diverted, he grabbed a small limb, bending it back as he passed, then let her go, which then smacked me on the side of the head. He let out a big chuckle as he said “watch out for that limb!” I said “you’re a little late with the warning!” 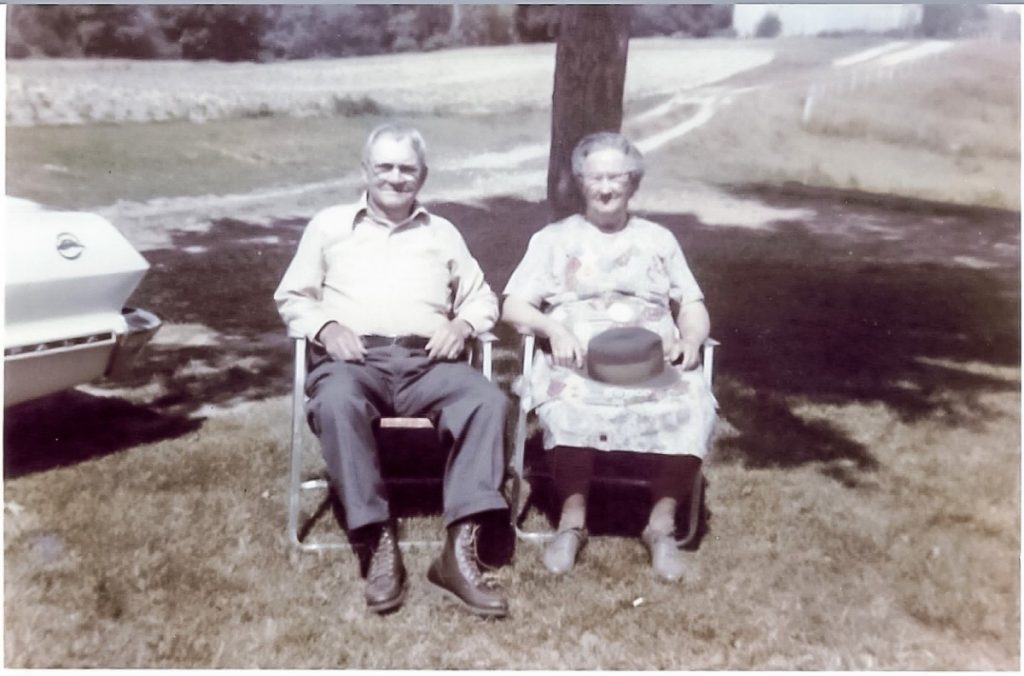 Luther Garlin Powell and Sallie Winn (Wheeler) Powell, my Papa and Grandma. This one of the last pictures taken of Papa.

There was a grassy clearing right in that bend, perfect for relaxing with a fishing pole. The water was dark green and calm where the bend formed a little eddy. Papa baited his two poles with worms, put a floater on one while letting the other settle to the bottom. I baited one pole, put a floater on it and let it drop into the water. I put artificial bait on my second one and started casting across creek, slowly dragging it in. We started catching fish right away, small catfish and bluegill, not really big enough to keep. I got a couple of light strikes on my rubber minnow, but nothing like the big bass I was hoping for. Papa caught a smallmouth bass and a fairly good-sized rock bass that we put on a stringer, hoping to catch more keepers. We had gone through most of our worms when Papa decided to put away his poles.

I was having a frustrating duel with a fish that kept sucking worms off of my hook, with Papa laughing each time I brought up a “cleaned” hook. He said “you know boy, that’s a tiny bluegill stealing all your bait.” I said “it may be, but I don’t like getting snookered, I’m gonna get him or bust a gut trying!” After a couple more cleaned hooks, I finally hooked that little sucker. When I brought it up, Papa laughed, slapped his leg and said “nice minnow!” When I took it off the hook, Papa asked if I wanted to add it to the stringer or just put it in the can to feed it to the worms. He was having a lot of fun at my expense, with tears rolling down his cheeks as I tossed my little “minnow” and the rest of the worms into the creek. I gathered up our gear, tossed Papa’s two fish back into the creek because, as my Daddy would say, “there wasn’t enough there to even make a turd!”

We sat there a little longer listening to the birds singing and the water bubbling over the riffle below the bend. Eventually Papa said “the shadows are getting long, we ought to head back.” We loaded up, climbed onto the tractor and headed back home.

s.I have always been thankful for that wonderful day and the sweet memory I made with Papa. We lost him shortly thereafter, he passed away on June 9th.