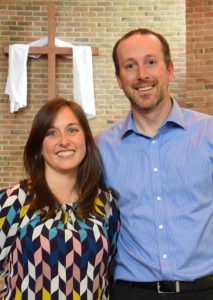 Reflecting on their adopted home of Barren County, Anne and Jeff Bruce say they most appreciate the community’s “vibrancy of life” they observe and get to be a part of every day. For the past six and one-half years, the couple has served as co-ministers at First Christian Church (Disciples of Christ) in Glasgow. As relative newlyweds living in Fort Worth, Texas, they assumed they would land a call to ministry in a city, possibly in Kentucky where they were reared. It turned out they were called to serve in a place they’d merely visited and have found it to be just right for them.

A native of Hopkinsville, Anne Ross Bruce graduated from Transylvania University in Lexington while Jeff, an Owensboro native, earned a degree from the University of Kentucky. The two attended Lexington Theological Seminary before embarking on careers as ministers. The two agreed that when they arrived in Glasgow for an interview with FCC’s search committee, they almost immediately realized Glasgow and the area was a place they could envision working, serving, and rearing a family. Now, Anne says, “it’s home. It was an adjustment from big city to smaller community, but the ease of life and the small-town connections have been great.”

Outside of pastoring the FCC congregation, Jeff says, “being in a smaller community has allowed me opportunities to do things I hadn’t done in years and that I might not have done very easily in a city.” For one, in addition to his church responsibilities, he is also a musician and plays in the local band, “The Unpredictables.” An avid cyclist and dedicated hiking enthusiast, he’s found the area is populated with people of similar interests and who enjoy the abundance of country roads and hiking trails.

Anne and Jeff both chuckle when asked how they “co-minister.” When they accepted the call to First Christian Church, Jeff was the “Senior Minister” and Anne was to serve as the “Associate Minister.” In reality, their work has evolved into what they consider co-ministering with each using their gifts and knowledge where it is best suited for the needs of the congregation.

“For example, if it’s a question about a youth program or Sunday School,” Anne says she tends to handle such areas. Jeff, on the other hand, uses his abilities to oversee administrative issues and finances. They share responsibilities as worship leaders and preachers, rotating their roles. Both agree that the congregation has been accepting of their somewhat fluid style of managing the congregation’s needs.

“This congregation took a chance on us,” Jeff says. He points out that for decades, the congregation had called older and more experienced ministers and says choosing them was a leap of faith. “They’re with us,” Jeff says, “they’ve given us the grace to grow and even allowed us to mess up.”

Anne reflected that one of the unique aspects of coming to a new place as a minister is “moving into a church family.” Learning the members of the congregation, she and Jeff found that they learned about the community and became a part of it.

Both Anne and Jeff agree that the greatest thing to happen in their lives was beginning a family here. They are the parents of Abby and Michael.

“When Abby was born, everything we’ve experienced here increased a thousand times. The blend of church and family became blurry. The people we’ve been called to care for suddenly became the people helping raise our family,” Anne says.

The feeling of belonging to the community increased once again with Michael who had complications soon after birth. Jeff recalls that “people ministered to us – people who weren’t even members of First Christian – because we are part of the community. We had a pediatrician – not a member of the church – call and offer guidance. We didn’t call anyone and suddenly people came to care for us because that’s what people here do.”

That experience, according to Jeff, “shows the strength of community beyond the church.”

This is the fourteenth in our series, “Forty Under Forty,” highlighting 40 Barren County residents, all under the age of 40, who are bringing vitality and vision to their careers, professions, and the local community. If you would like to suggest an individual for the series, send an email to progress@jpinews.com or call 270-670-3588.