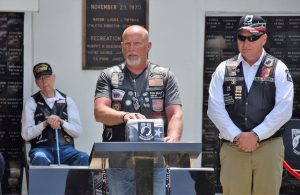 Kicking off the area’s annual observance of Memorial Day, several veterans and local residents gathered at the Veterans’ Wall of Honor in downtown Glasgow last week to recall the country’s Prisoners of War and military personnel classified as Missing in Action. Of special significance was a POW/MIA flag that is headed for preservation at the Smithsonian Institution in Washington, D.C.

The flag, carefully folded and contained in a clear box, has traveled to all 50 states thanks to volunteers from Rolling Thunder chapters around the country. Todd Matonich, Kelly Shehan, and Tom Wilson of Rolling Thunder’s Kentucky Chapter 5 in Lexington rolled into Glasgow last week, bringing the flag to the final stop on its journey across America. When they arrived in Glasgow, the men had logged more than 1,200 miles on their motorcycles as their part of the project.

After leaving Glasgow, the flag travelled to Somerset and Lexington before returning to its starting point in West Virginia. The flag will then go to its final destination in the country’s Capitol city. Through its journey, Rolling Thunder members asked those attending similar ceremonies to record their name in a register that will stay with the flag, a documentation of a nation’s continuing remembrance of military personnel who remain unaccounted for.

As part of the Glasgow ceremony, DAV Chapter 20 President Michael Wilson and Bud Tarry, both veterans of the Vietnam War, were tasked with the raising of an identical POW/MIA flag that will fly beneath the Stars and Stripes in Beula Nunn Park. The event also included a 21-gun salute and the playing of taps by the DAV Color Guard. 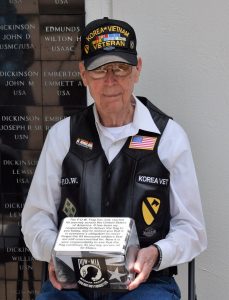 FORMER POW Charles Ross of Cave City holds the special POW-MIA flag that has toured all 50 states and is now headed to the Smithsonian Institution.

Among the attendees was Charles Ross of Cave City who was held as a prisoner of war for 34 months during the Korean War. In an earlier interview with Ross, he said he was not beaten or mistreated but the living conditions were deplorable and caused many of his comrades to die of malnutrition and or disease. According to Ross, two to five soldiers died each day, and being on burial detail, always attempting to keep the soldier and his identification together in the shallow graves.

Ross recalled that some soldiers simply gave up and refused to eat meals that consisted of some type of grain. At times, he and his fellow POWs went as long as six months without a bath. The unsanitary conditions were worsened by body lice that the prisoners tried to combat by squeezing with their hands, leaving them with blood-covered hands and no water for washing.

Brainwashing was prevalent in Ross’ prison camp as his Chinese captors required American soldiers to attend classes designed to indoctrinate them in Communism. He recalled that the techniques worked on a few of the soldiers and around 20 chose to stay behind rather than return to the United States.

Humor played a big part in Ross’ survival strategy as he and his fellow soldiers searched for something funny amid the horrid conditions. To pass time and keep some form of sanity, Ross made playing cards from cardboard and joined fellow prisoners in telling stories about their families.

Charles Ross’ service to his country did not end with his release and return to the United States. He also served a tour of duty in Vietnam before retiring from the military in October 1970. 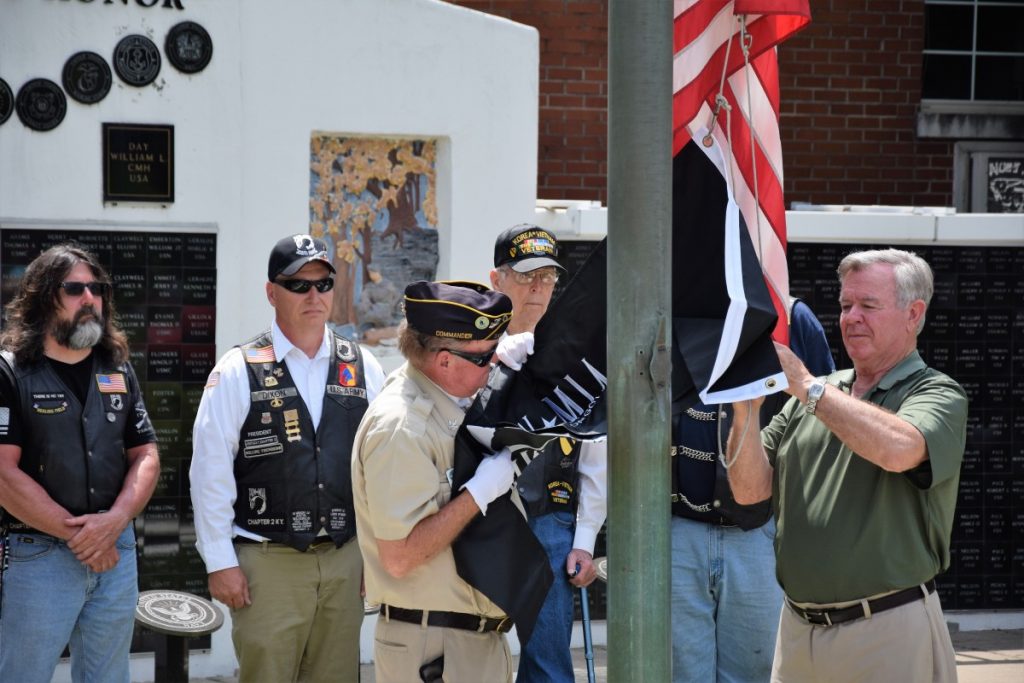 KELLY SHEHAN, Jimmie Dixon and Charles Ross watch as Michael Wilson and Bud Tarry add the POW-MIA Flag to the flagpole at the Veterans’ Wall of Honor. 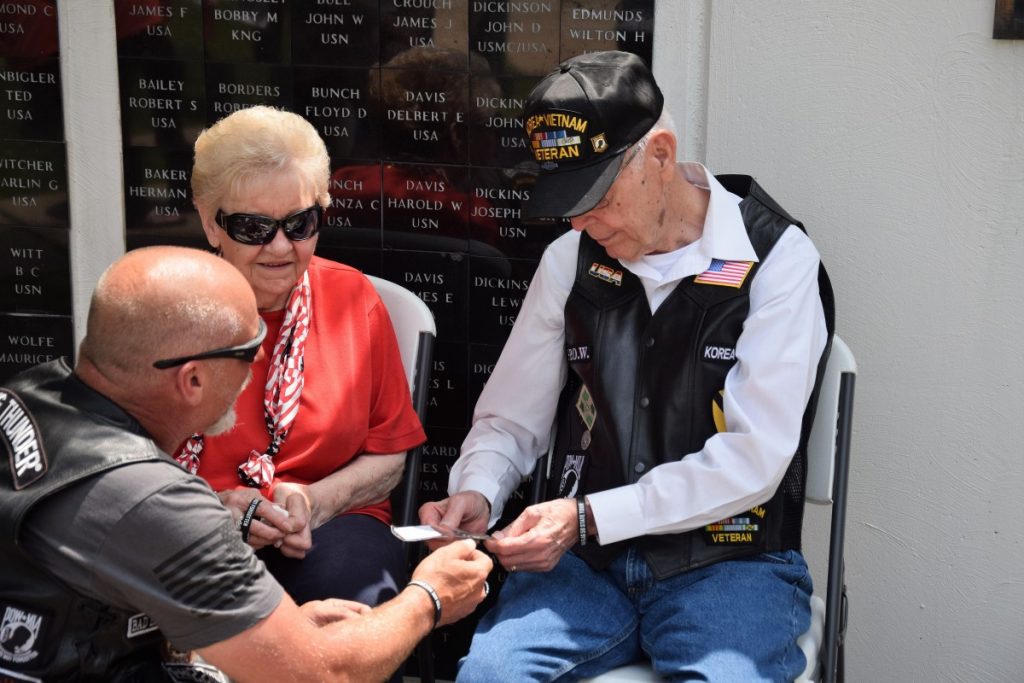 CHARLES ROSS, seated at right, himself a former POW, receives a token of appreciation from Todd Matonich of Rolling Thunder Kentucky Chapter 5 in Lexington. Ross was held prisoner for 34 months during the Korean War. Seated between the men is Jan Ross, Charles Ross’ wife; the couple live in Cave City.