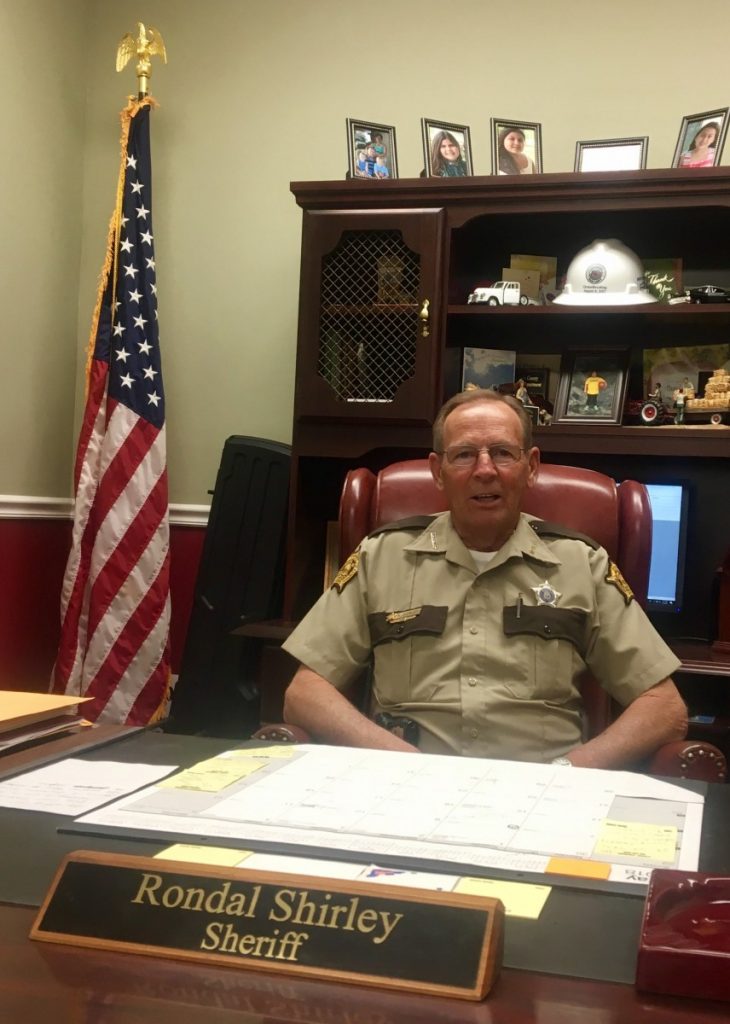 Rondal Shirley has served as Metcalfe County’s Sheriff for nearly 20 years, but this year he is not running for reelection.

Last week, over the low hum of classic country radio, situated between the America flag and Kentucky’s flag, he reflected on his lengthy tenure and the future of the county, which he has always called home.

He is the first sheriff in the county’s history to serve 20 consecutive years, demonstrating that he’s been the people’s favorite.

When Shirley decided to run, it wasn’t because he had anything against them Sheriff Rex Bunch.

“He was a friend,” said Shirley. “I did it because the people were ready to change some stuff.”

Shirley didn’t have a background in law enforcement; He had an agricultural background, and grew up on his family farm in the Cork community.

“I came from a dairy and forty some acres of tobacco.”

Considering, one might wonder what about being the Sheriff of Metcalfe County appealed to Shirley. That can be answered with a childhood recollection.

“Things are sure different now, then they were when I was raised,” he said.

“We lived on a gravel road, we went to school and to church. Other than that, we came into town every month for a haircut, but we lived on the farm.

“I had five brothers and two sisters, I spent a lot of time playing in a ditch down by the road in sifted dirt. This was the late fifties, early 60’s. Thomas Pendleton was the sheriff. He drove a big, long car with one of those big, old lights on top. He patrolled the back roads. Whenever he came through he’d speak to me; that stayed with me. It fanaticized me, that he would take time to talk to me and to recognize a little boy.

“I wanted to be the kind of man he seemed to be.”

Nostalgia aside, Shirley admits that he didn’t know what he was in for when he was first elected.

“I had no clue what I was doing,” said Shirley. “But I knew what I wanted to accomplish.”

On the night of the election, Shirley listened the election results on the radio at home.

“Rex Bunch called me to congratulate me,” he said.

In the beginning, he had just two deputies and a very small staff. Back then, the sheriff was responsible for buying the vehicles and uniforms.

On the night of December 31, 1998, he and his deputies were at dispatch at midnight, ready to take over the duties at hand.

“We got the ground running that night and we never stopped,” Shirley said.

It was an overwhelming beginning.

Needless to say, those early years were full of challenges.

“I learned it in four years he could barely get started. How could even get your feet wet?”

Fortunately for Shirley he didn’t have to limit his progress to a four-year term.

During his long tenure he’s been through five election cycles, running 10 races.

“I never had a time when I didn’t have an opponent,” he said.

Although Metcalfe is certainly a little slice of Americana, it hasn’t always been like Mayberry.

He says that although things have changed some over twenty years, for the duration of his career, drugs remain the biggest problem Metcalfe County faces.

“People ask me if the alcohol has made a big change. Not really, that not to say I was for it, I wasn’t, I’m not for that type of change, but it hasn’t changed things all that much.”

What has changed over the years is the sort of drug abuse Shirley and his deputies have seen.

“Prescription drugs are the biggest problem we see now,” he said. Because they are technically legal, it makes the problem difficult to ratify.

Over the years, he has worked some brutal wrecks. “One year we worked 98 percent of the wrecks in Metcalfe County,” he said.

He also witnessed some gory shootings through the years. The incidents that involve children have stuck with him the most.

Once such incident involved a mother who attempted suicide. Her adolescent son ran to a neighbor for help, and the neighbor called the sheriff’s department.

“While the paramedics were inside, I was talking to the little boy. He looked a lot like one of my grandsons. He kept saying ‘mama wouldn’t shoot me’. There was a swelled up ball of blood on his cheek.”

They initially thought it was blood splatter, but up close and personal, Sheriff Shirley realized it was actually a bullet hole.

“She had shot at him and the bullet had lodged in his cheek.”

The paramedics rushed to him. Because of the precarious location in danger involved, the bullet had to be left.

“That was hard to see,” Shirley said. “It’s a sad thing when children are involved.”

Children are going to play a lead role in Shirley’s retirement.

Shirley admits that a 1999 when he became a public servant, his family was not his primary focus.

“There were two Christmases in a row where I had to leave the house on a call, had to get up and leave the dinner table,” Shirley said.

He’s made up for that in recent years.

Only a few years ago he and his wife, Connie, went into foster care and wound up adopting three young ladies who are still in elementary school. His biological children, now fully grown, and he has a slue of grandkids and great-grandkids.

Hunting and fishing may play a role as well.

“I’m not a fisherman. I never get to fish, my girls like to fish and I spent all of my time baiting hooks,” he said.

“There is a lot more to being sheriff than this stuff right here,” he said, patting his gun.

“You can buy this stuff.”

Although Shirley has been elected to his post, he readily states that he is not a politician.

“I despise politics. I’m a farmer, that’s in my blood.”

Although he hasn’t played politics he has been a good steward for the county, putting his knowledge of human nature and public relations skills to work.

“I have a temper but I have kept it in check. I’ve always told people I will treat them as good as they let me.”

“We have laws. I’ve never tried to change them but I have tried to administer them with common sense.”

“I’m very thankful for the opportunity the county has given me, they didn’t have to,” Shirley said.

“I’ve tried to do good for the county. I hope I have.”