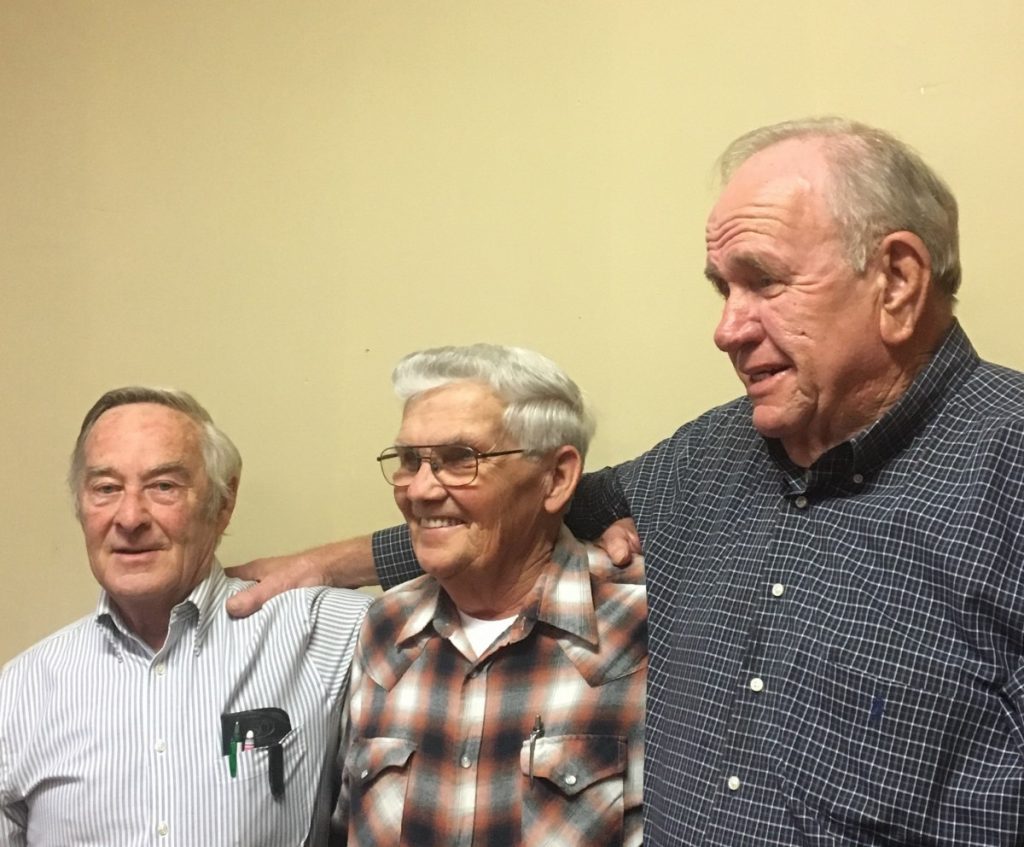 The Vietnam War ended 43 years ago this April, but for many veterans the memory is still very much alive.

In 1965, the 69th Armor of the 25th Infantry Division were deployed to Vietnam. In the 3rd platoon there were 36 soldiers, including Harry Ramey of Glasgow, Kentucky, Elmer Shoopman of Whitley City, Kentucky and Sam McElroy of Murfreesboro, Tennessee.

Although the three had never met before, Ramey, “Shoopy” and McElroy soon became the best of friends.

McElroy and Shoopman were drafted. Ramey was a volunteer.

Through trials and tribulations of war and a friendship forged in the fires of adversity, they all made it out of Vietnam alive in 1966.

Two springs ago, in April of 2016, McElroy and his wife were sorting through boxes stored under the stairs in their Murfreesboro home.

McElroy’s wife, Mary, found a faded old photograph of two young, strapping soldiers in the Vietnam jungle. It was a long-lost picture of McElroy and Shoopman, taken by Ramey.

Needless to say, that brought back a flood of memories for McElroy.

“That was on a Wednesday, when we found that picture. I sat looking at it that night. On Sunday, I got a call. They said, ‘is this Sam McElroy, Sam McElroy of the 25th Infantry Division?’ I said, ‘yes, it is.’ It was Ramey, I hadn’t heard his voice since 1966; stuff like that isn’t coincidence.”

Ramey, who had recently moved from Texas back to his hometown of Glasgow, Kentucky, had decided it was time to find his old army buddies. He found Shoopman living in Somerset. Before long, the three of them- Ramey, Shoopman and McElroy- were in communication with each other for the first time in 50 years.

Just last week, they saw each other face to face for the first time in 52 years. As fate would have it, they all lived within a 100 mile radius of one another.

Through knowing smiles, laughter and tears, the three shared their memories of the old days and stories of their lives since they left Vietnam.

“I can’t describe it, words can’t even describe how this feels,” said McElroy.

“I feel very happy and blessed that we are still around to share our time serving our country,” Ramey said.

Gratitude for making it through the war and into fulfilling lives afterwards was a common theme.

“We spent all of our time together,” said Shoopman.

“And we lost a lot of good men over there,” McElroy said.

“We could have been there for life, because when you’re dodging bullets whizzing past your head, any minute could be your last,” Ramey said.

Although they have nothing but fond memories of one another, they all have sorrowful memories of the Vietnam War.

“After McElroy and Ramey were gone, we came to a place where there was a brigade of enemy soldiers and there was only one way into there, and there were landmines everywhere,” Shoopman recollected. “We only had one tank left running and we were out of supplies. We had to sleep in a ditch 24 hours a day and stay awake gripping an M16 to keep alive. It wouldn’t stop raining, so I was laying in the mud. My skin looked like a prune. We had to wait for food and water and parts for our vehicles. They flew over us and dropped down grass sacks. The first grass sacks were full of beer, and then came the parts. I really didn’t think I would make it out alive. It was a terrible ordeal.”

“I remember the kids running along beside the tanks and Jeeps, swollen bellies and starving, looking for food,” said Ramey.

“They were pitiful,” McElroy added.

“Sometimes they come into camp to eat scraps out of the trash,” Shoopman said

That’s not to say that all of the memories are so bad, because they had each other.

One especially fond memory the three share is of a stray white dog they found, which they named Lightning. 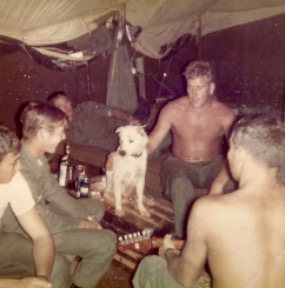 “This little dog came walking up to us, and we were getting ready to board a ship to go up the Saigon River and out to sea to get into another part of Vietnam,” said Ramey.

“Well, sailors weren’t even allowed to have a goldfish, and here we were sneaking a little dog on board. The captain on the ship, he got so mad. He was furious, we got chewed out big time, but our captain, Cpt. Mullins, agreed that when we got to land he would punish us.”

“He never did,” McElroy said. “He liked that dog. Everybody loved Lightning.”

“One day going down the road, he fell out of the back of the Jeep. I didn’t figure I’d ever see him again, but just a little while later, he came running up the road into camp.”

Sadly, Lightning had to stay behind when they left. “I hated to leave him,” McElroy said.

The three also had a hearty laugh about the time their Platoon sergeant, Sgt. Donovan, kicked out some of Ramey’s teeth.

“He had to,” Ramey said. “To keep me from killing us all. He was giving me commands on the two way radio, and my cable came loose. The last thing I heard was ‘cut it all the way to the left and give it hell’, so I did. He was telling me to stop, but I couldn’t hear him. All he could do is swing his feet down over off the top of the tank into the open window, kick my face. Thank God he did, because we were just a couple of inches from a cliff.”

Back home, all three of the veterans fell in love and married not long after landing back in America.

Harry Ramey was the first to leave Vietnam in July of 1966. He came home to Glasgow Kentucky, met his wife Kathy and married not long after.

“I told my mother when I saw Kathy walking down the street, that’s the woman I’m going to marry,” said Ramey. That was 50 years ago.

Ramey pursued a career in the medical field as a respiratory therapist, and worked moving to various places including Texas, Louisiana, and Oklahoma.

While in Vietnam, Ramey was most impacted by the living conditions of the Vietnamese children that he came into contact with. One especially horrific incident, where an officer in his own platoon shot a young child running after the Jeep, left him with horrifying memories and a desire to do good things for children if he made it home alive.

“I thought, if I can make it out of here alive, I’ll spend the rest of my life doing things for children because I think that’s my calling,” Ramey said.

He and Kathy raised three children of their own, adopted a fourth child and fostered 23 more before moving back to Glasgow.

McElroy left Vietnam in September of 1966. While he was overseas, his father was killed by a drunk driver.in a car accident.

Before being drafted, he’d had a good job as a union ironworker. “I went from $900 a month to $73 a month; talk about a change of lifestyle,” he laughed.

After returning home, he went back to work as a union ironworker and finished out his career as the president and business manager of the same organization in Nashville, living in Murfreesboro.

On September 11, 2013, he had the poignant honor of placing a wreath on the Tomb of the Unknown.

He and his wife of 48 years, Mary, now spend their days relishing their children and grandchildren, and like all three couples, are still very much in love.

“When I met him, I thought he was so handsome, and he still is,” said Mary. “I was engaged to another man when I met him, but I gladly broke my engagement.”

Elmer Shoopman was the last to leave Vietnam, in November of 1966.

When he came home, he went to Ohio for work and got a job with Hartzell Hardware, where he worked as a foreman for five decades. They transferred him to Kentucky just a few years ago because both he and his wife of 51 years, Caroline, wanted to return to their home state. They now live in Somerset.

In their careers and marriages, all have exhibited dedication above and beyond the call of duty, having learned that life is precious and meant to be taken seriously.

They spent the entire day together, talking, eating and playing music.

“I think they coined the phrase pick and grin after us,” McElroy laughed. 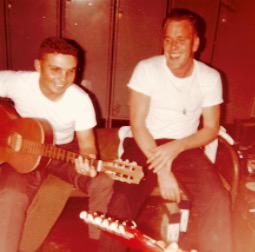 “This man here is the best banjo picker you’ll ever see, and when Shoopy would play, me and Ramey would grin.”

“There were hard times over there, but having these men with me made it bearable,” Shoopman said.

Before the reunion, they were full of excitement.

“Me either, too excited,” said Shoopman.

“We waited a long time to see one another again,” Ramey said.

Now that the three friends have found one another again, they agreed not to let much time pass sitting down and breaking bread again.

“We will do this again, and soon. Before the time gets away. We are lucky to be alive, to see each other again,” McElroy said.