The day after the May 16, 2018 issue of the Edmonson News in which a story about civil rights violations against juveniles was published, an associate attorney with the local law firm Logsdon and Associates, Crystal Thompson, was searched in Edmonson County Court House.

Gary Logsdon released to the Edmonson News the following statement. “The search of my employee and the call to my office by Sheriff Doyle were intended to harass and intimidate my staff and I for the filing of the two (2) high speed chase injury lawsuits and coming directly on the heels of the publication of the article carried by the Edmonson County newspaper on the day before these events is too related to be dismissed as mere coincidence.”

The Edmonson News reported that on May 8, Brownsville attorney Gary Logsdon and attorney Greg Belzley of Prospect, filed a lawsuit on behalf of Wendy Browning, the mother of an injured juvenile. According to the legal filing, Belzley specializes in police misconduct and abuse of power cases involving law enforcement.

Logsdon’s release went on to say, “The filing by my office of the civil rights lawsuit against the local Sheriff’s Office on behalf of the juveniles severely injured in an unwarranted and illegal high speed chase incident reported widely in your newspaper, my Associate Attorney, Crystal Thompson, who has been employed by my office for several months and is well known by all court room personnel upon entering the court house was approached by Bailiff of the Edmonson Circuit Court and Edmonson District Court, McDougal, an employee of the ECSO who requested to search her purse as he had been advised that she (Crystal Thompson) was reported to have a gun in her purse which Ms. Thompson emphatically denied. Ms. Thompson refused to submit to the search requesting instead a search warrant be provided.”

The suit filed and printed in the Edmonson News detailed how an unconscious 14-year old was tased by an Edmonson County Sheriff’s Deputy Jordan Jones and had been omitted from a report written by Jones and provided to the Edmonson News by County Attorney Greg Vincent.

If it were not for the documents released by the Warren County Sheriff Peanuts Gaines’ deputies which gave details of the unresponsive juvenile being tased, Edmonson County citizens and the parent of the juvenile wouldn’t ever have known.

Doyle has refused to investigate the omission by his deputy Jones although three magistrates have been confirmed to have requested him to look into this matter.

In a statement from Thompson she wrote, “Strangely and importantly, Sheriff Doyle and County Attorney Greg Vincent when asked to identify the source of the report that I was entering court with a gun in her purse advised that they knew the identity of the person making the report but would not divulge to me the identity of the liar.”

Thompson continued, “Stranger to me still is the incentive of the Edmonson County Law Enforcement Establishment (Sheriff and County Attorney) to protect the liar and further still to not prosecute the liar for falsely reporting an incident which is a crime in Kentucky under KRS 519.040 (Falsely Reporting and Incident). The Local Law Enforcement Establishment will neither identify nor prosecute the source of this harassment and intimidation. This is the point to which Law Enforcement in Edmonson County has devolved. Now liars and criminals are under the active protection of the Local Sheriff.”

In a phone conversation with Thompson she said, “I was absolutely humiliated in front of my peers, and a full court room.” She said, “Mr. Jobe, they were looking inside my personal items in the purse until Judge Patton stopped them.”

Thompson said she has worked there for years and the court knows her, law enforcement knows her, and she does all she can to honor the courts and the families she serves. She closed saying, “This particular case is defending the most innocent – an unconscious child – and I get attacked because of it.”

Thompson said she fears actions such as those described will, if not corrected, destroy justice in Edmonson County. “I worry that if they will do such things right in front our legal system what in the world will they do to people in the dark and beside of the road when nobody is watching. The next time could be worse than tasing a juvenile.”

The Edmonson News has confirmed with Special Judge Phil Patton that the incident did occur. The Edmonson News has also contacted County Attorney Greg Vincent and Edmonson County Sheriff Shane Doyle for comment; neither had responded at the time of publication of this news story.

This story will be updated as it develops. Watch for details in the upcoming edition of the Edmonson News. 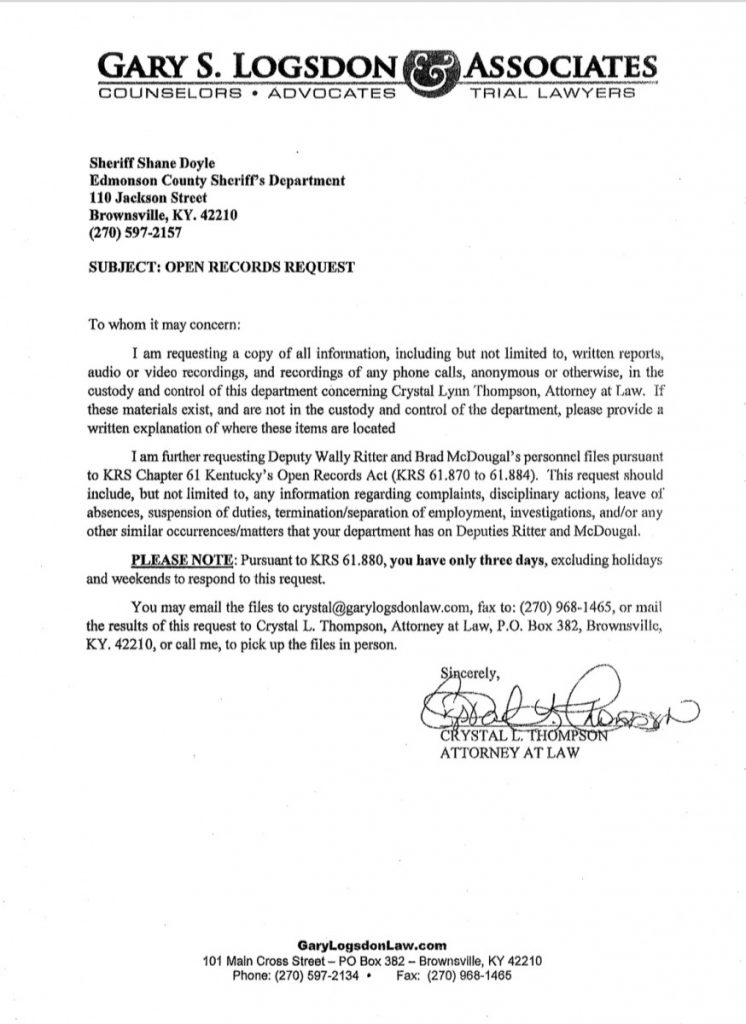 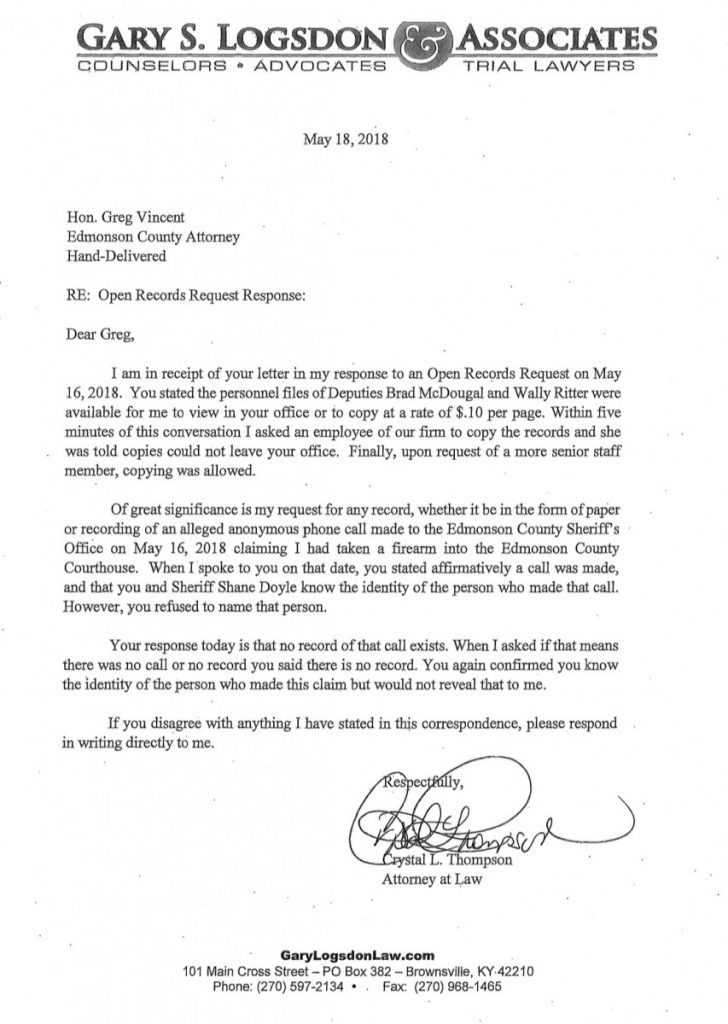 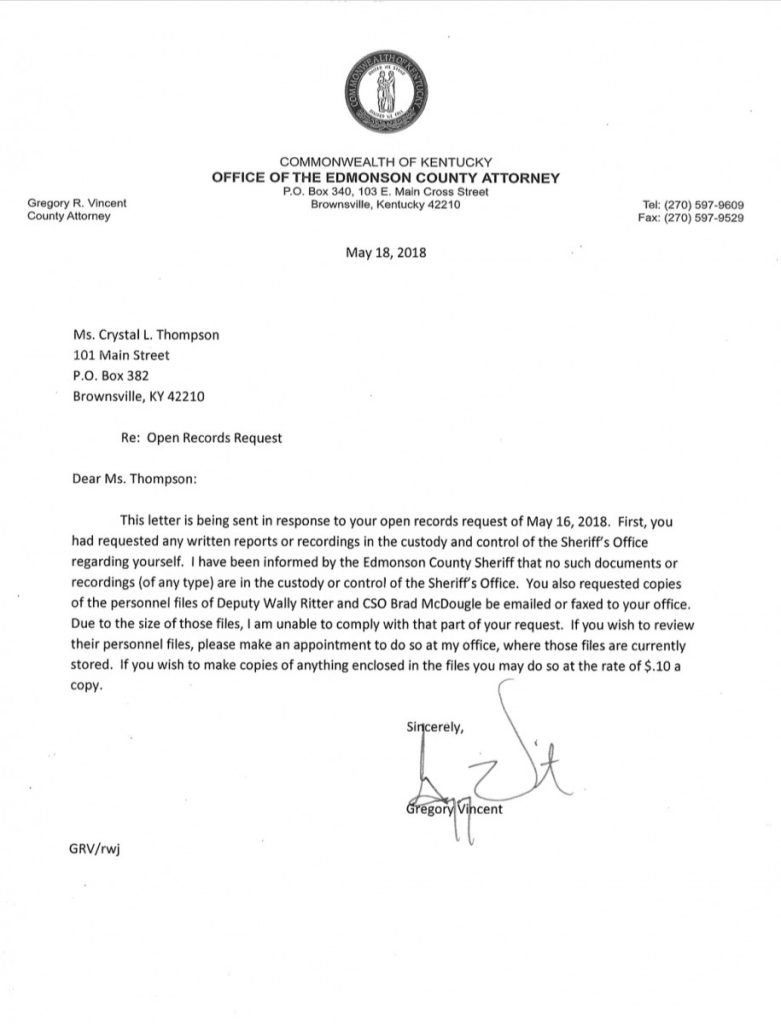