Two Barren County High School students were recognized Tuesday morning for their heroic acts that saved the life of a classmate. Junior Alex Lowe and Sophomore Wyatt Lyles were lauded by the school officials, government officials, and more than 1,300 cheering classmates. 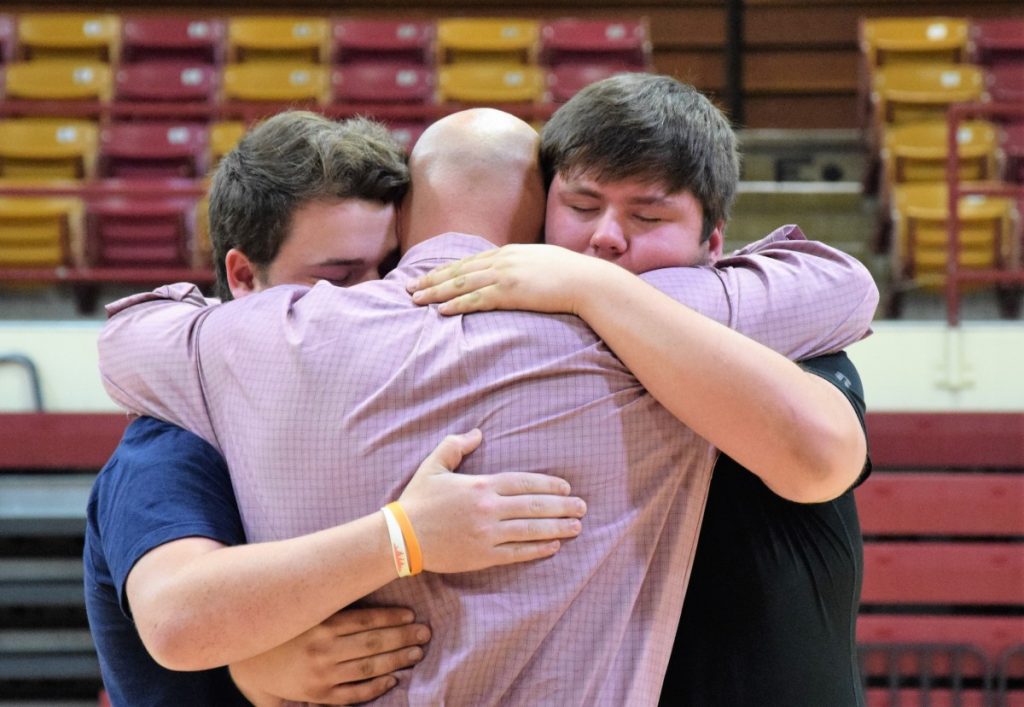 Barren County High School students Wyatt Lyles and Alex Lowe got a hug from Barren County Judge/Executive Micheal Hale during a program recognizing the young men for saving the life of a classmate.

The students were returning to their homes on Friday night, May 4 after attending the Future Farmers of America banquet at the school when they came upon the scene of an automobile accident involving another classmate, Nataly Holman. 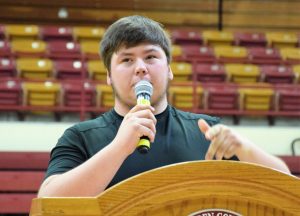 Principal Brad Johnson told the assembly that he had slept later than usual on Saturday morning and when he awakened “I had about 25 messages on my phone. I said ‘this is not good. This is not 25 messages telling me to have a good day,’” he recalled.

“I started at the top and began reading. The first said ‘accident.’ Another said ‘students stopped after FFA banquet. They were the first there.’ I scrolled down and read ‘taken to Vanderbilt’ – that’s a principal’s nightmare. I scrolled down further and a message said ‘she’s going to live’ and finally ‘students saved her life,’” Johnson said. 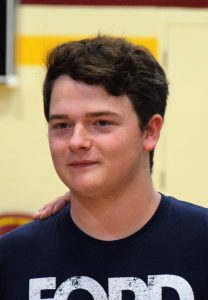 Observing heavy smoke at the scene, the students feared a fire could erupt or there could be an explosion. Their first act of heroism was to pull Holman from beneath the overturned Jeep she was driving and drag her to safety. While they had no advanced medical training, the students realized Holman was rapidly losing blood from her arm and using a belt and a shirt, created a tourniquet around her shoulder to control the bleeding. Medical personnel at the scene later and at Vanderbilt University Hospital verified that Holman was bleeding so badly from her arm that she would have bled to death with immediate attention.

“This is the ultimate ‘Trojans looking out for Trojans’,” Johnson said, referencing the school’s program through which students are encouraged to confidentially let school officials know when they observe a student in need or having some sort of issue. According to Johnson, the anonymous program has enabled officials to help families of students who may need food or assistance in keeping electricity on, or may be bullied, or experiencing some difficulty.

“We wanted to squeeze in a quick assembly and recognize Alex and Wyatt for their bravery, for their love of a classmate, and for their quick thinking,” Johnson said. The students were presented the 2018 Trojans Taking Care of Trojans award to Lowe and Lyles.
Barren County Judge / Executive Micheal Hale introduced Caroline Billingsley, a BCHS senior and student apprentice in the Judge / Executive’s office, who told the audience about the ECHO Award, a new recognition inspired by Lowe and Lyles. The award’s name is an acronym for Exemplary Citizens Helping Others. Billingsley said the award will be presented annually to individuals that go above and beyond to make a difference in this community. “It honors those individuals who, through a simple act, have created such change that the echoes of that act can be heard for years to come,” Billingsley said. 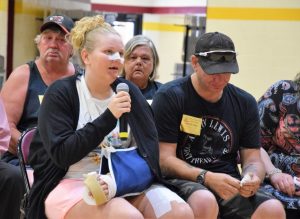 Nataly Holman spoke to the BCHS student body about her classmates saving her life.

The students were each presented a Citation of Appreciation issued by the Kentucky House of Representatives and presented by 23rd District State Representative Steve Riley. Lowe and Lyles have also been named “Hometown Heroes” by WBKO Television and will be featured in a segment on May 25.

While Lyles declined the opportunity to speak, Lowe advised his schoolmates, “If any of you are ever in the position that me and Wyatt was in that night, I want you to try your best to do the same thing and the same actions that we did because you never know when you’ll be in the position that Nataly was in and you’ll need somebody to help you.

Johnson surprised the assembly by introducing Holman who was back at the school for the first time since the accident. Still heavily bruised and bandaged, Holman briefly spoke of the valiant efforts Lowe and Lyles put forth in rescuing her.
“Thank you, guys. I love you all,” Holman said to her rescuers and her schoolmates. 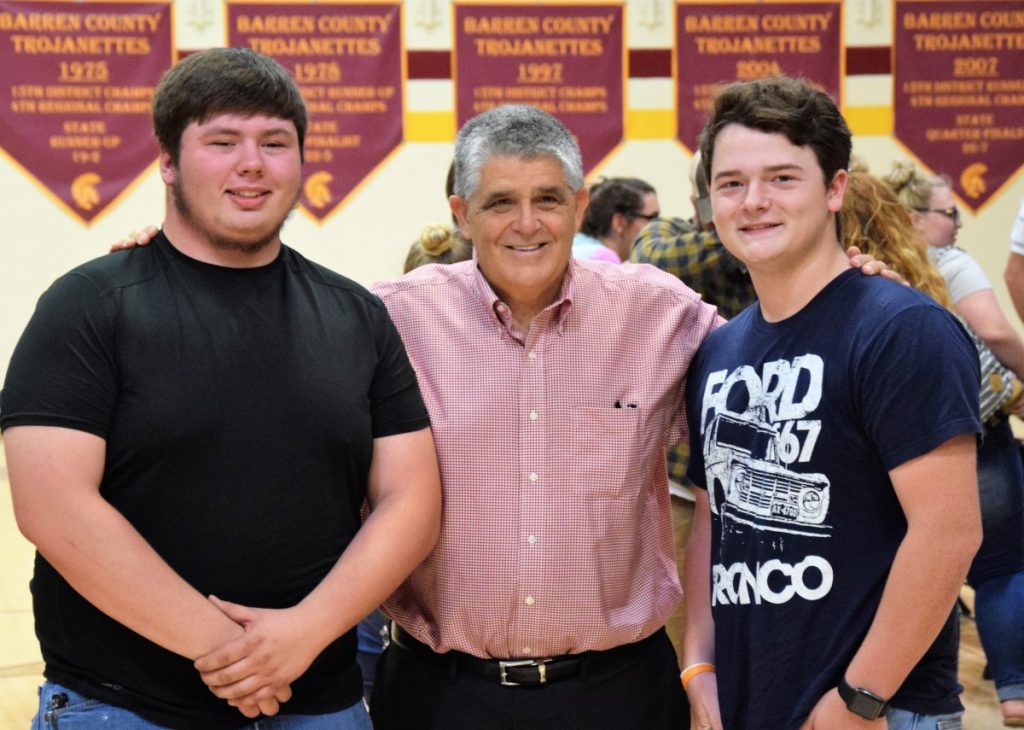