In the May 24, 2017 issue of the Edmonson News it was reported that not until the former Edmonson County Sheriff’s Deputy Amanda Coniglio brought it to his attention Judge Executive Wil Cannon had no knowledge that the current Edmonson County Animal Control Officer Eric Roscoe had been charged with a domestic violence felony charge.

The Edmonson News provided a copy of the actual document obtained from our May, 2017 open record request from the arresting police agency.   Naturally the copy had names of the victims redacted.

The statements referenced a mother and daughter, a pregnant woman, repeat violence and fear because of firearms.

At that time, the Edmonson News was told by Sheriff Shane Doyle that it wasn’t his responsibility to do a background check because he didn’t hire Roscoe and wasn’t in charge of hiring him.  This is a common theme for many communications with Sheriff Doyle over the months since publication.

It has also been reported that Cannon was confused why he would say he only supervised Roscoe and that he should have done the background check.

This story has all but been history more than once to only be brought back up because of conflicting issues having to do with the published story.  This time, a county official provided screen shots of the Edmonson Voice which is owned by Sheriff Doyle’s brother, Darren Doyle, that shows prior to the Edmonson News coverage the headline for the fiscal court meeting in which Roscoe was hired said, “Sheriff’s office hires Sweden Navy veteran as animal control officer,” but now has been changed to “Sheriff’s office announces Sweden Navy veteran as animal control officer.” 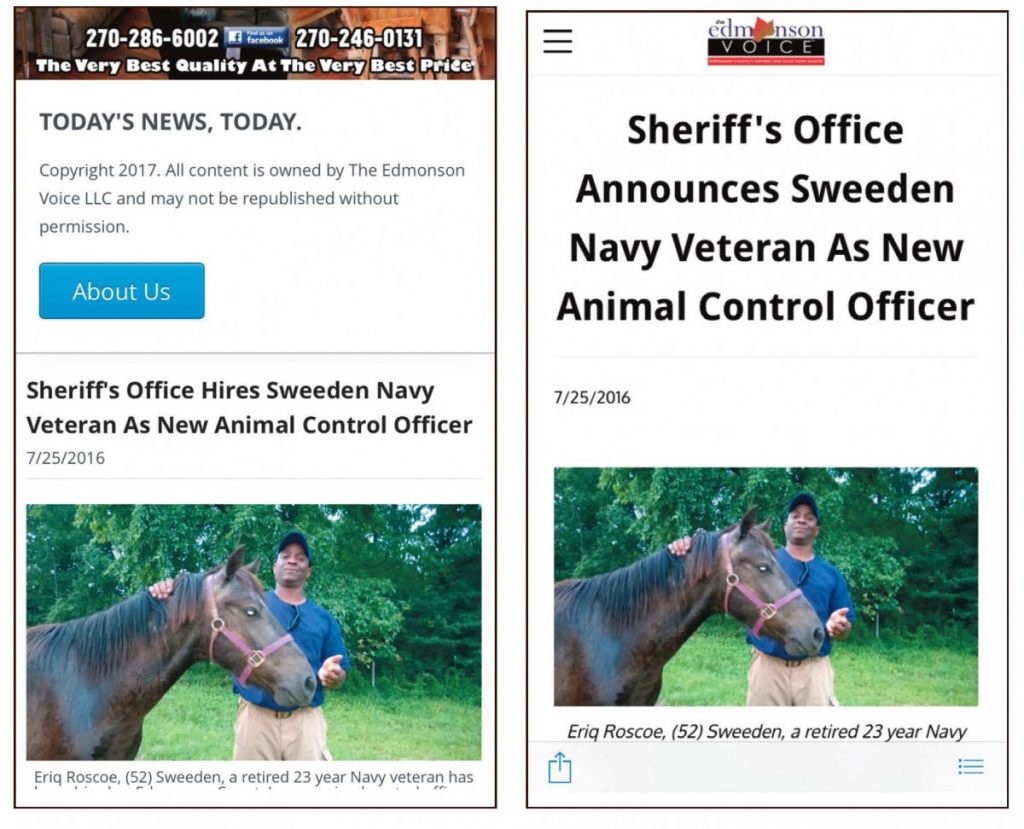 ABOVE LEFT, is an actual screenshot showing the headline as originally posted to the Edmonson Voice website on July 25, 2016 and remained until sometime after the Edmonson News broke story showing no background check was provided and Sheriff Doyle saying he didn’t hire the guy it wasn’t his responsibility to do a background check, and later admitted he knew of the domestic violence felony charge but didn’t inform Judge Executive Wil Cannon, fiscal court or anyone else. AT RIGHT, is an actualScreenshot after the Edmonson News story broke showing the headline has been changed with no editorial reference for changes. In essence this change has altered Edmonson County history to match what Sheriff Doyle said instead of what really happened. 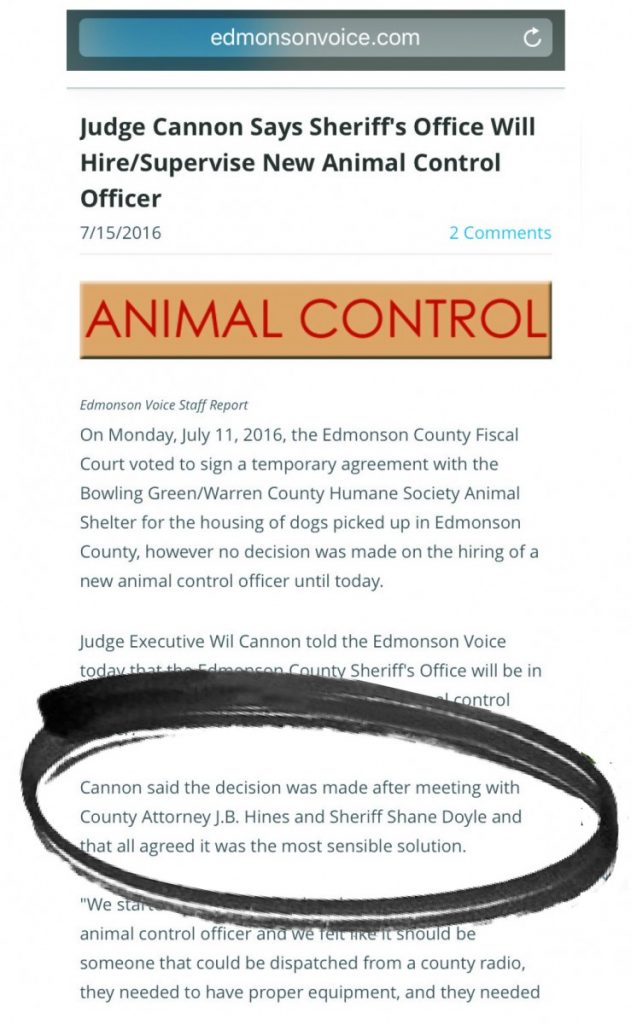 Actual screen shot showing a very detailed story on the Edmonson Voice posted July 15, 2016. It clearly shows Sheriff Shane Doyle was to hire and supervise new animal control officer. This story has now been removed completely and not searchable at press time.

The official also provided a copy of a story posted by the same website on July 15, 2016 which had a headline, “Judge Cannon says Sheriff’s Office will hire/supervise new animal control officer.”  That article went on to say that Judge Executive Wil Cannon told the Edmonson Voice that the Edmonson County Sheriff’s Office will be in charge of hiring and supervising a new animal control officer.” The story detailed that Cannon said the decision was made after meeting with the County Attorney and the Sheriff and all agreed this was the best way for it to be handled.

This story has been deleted completely and is no longer searchable on the website or online.

Another source has provided documents that show prior to the Edmonson News questioning Eric Roscoe’s military history the Edmonson Voice did promotions stating that Roscoe was a retired Navy Seal Medic and would be speaking with those credentials.  Although Sheriff Doyle still stands by his statements that he saw documentation proving Roscoe was “Special Forces”, he and his brother have  now downgraded his bio to be retired US Navy.  The screens shots provided to the Edmonson News by a second concerned citizen showing the original bio has also been deleted and isn’t searchable as all other news stories.

Roscoe has refused to help clear up this matter or provide documentation to support the Sheriff’s position of him being special forces or the originally listed descriptions of being a Navy Seal Medic.  Our conversations with both the Wounded Hero Fund and the Public Information Officer at Fort Knox state clearly Roscoe was not ever a Special Forces Navy Seal.  Both agree anyone making such claims intentionally would be in violation of the law; specifically the Stolen Valor Act signed into law in 2013.

Of course, media outlets whether online or in print can make mistakes but the standard protocol for making corrections to a story is to add an editor’s note, not go back and rewrite history and never delete complete stories because they contains information in direct conflict with a public official’s on the record statements.  Covering up or cleaning of records places the elected official or politics above the mission of truth for the communities we serve.

The Edmonson News stands by our unaltered stories today, as they were printed decades ago and will be printed in the future. 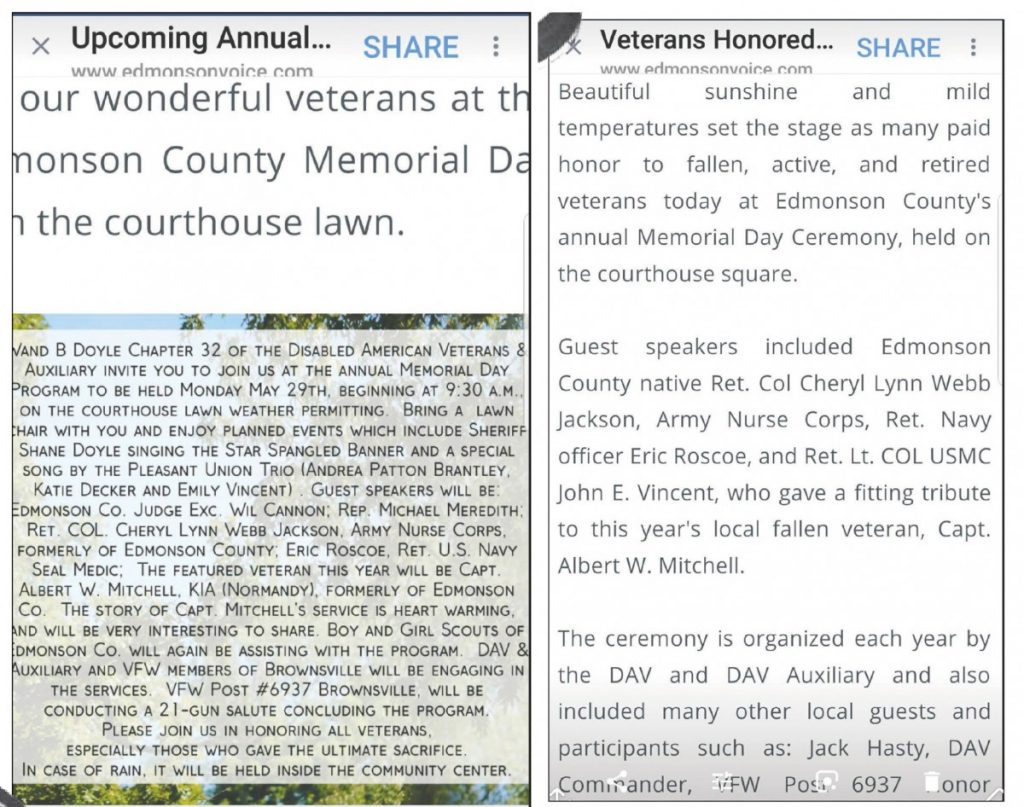