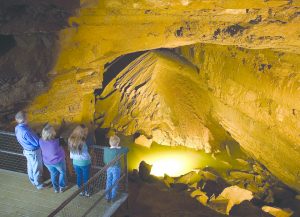 The view downstream from the Hidden River Cave tour.

Foster commented that the bridge would probably quadruple the length of the current tour and would be an attraction in itself. He pointed out that his competition for tourists, Mammoth Cave, was going in the other direction with more convenience on its tours.

“We need something different, and I think adventure to attract tourists is the way for us to go,” he said. “The bridge will be something unique and will reduce the stress on the cave.

The bridge, which will be made of a steel mesh material, will be anchored by two cables. The biggest challenge to extending the tour is crossing a deep canyon carved by the Hidden River. The largest cave passages lie downstream from this canyon.

“As best as we can determine, this would be the longest underground swinging bridge in the world. We are hoping that we will be able to get the bridge open for visitors by the summer 2018 season,” Foster said.

The bridge will be short of what is, perhaps, the largest cave room in the world, Sunset Dome. A shorter bridge will be necessary to reach this room, according to Foster.

“It will be an easier job and will probably be done in another six months,” he said.

The ACCA began fundraising for this project more than five years ago. The project is expected to cost more than $400,000.Funding support for the project has been donated or pledged from the Dart Foundation, The James Graham Brown Foundation and the Appalachian Regional Commission, a federal agency which supports economic development projects in rural areas. The federal funding was supported by Governor Bevin and his economic development cabinet and is being administered by the USDA office in Elizabethtown. The construction firm Scott and Murphy was award the bid to build the project in September of 2017.