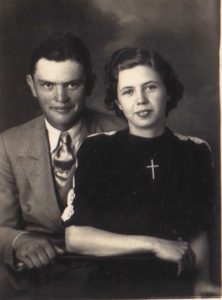 Eighty years ago, gasoline was 10-cents a gallon and the average American worker earned just over $1,700 a year. Polio terrified Americans and led to the creation of the March of Dimes that year and Superman first appeared as a comic book action figure to thrill young readers. In Barren County, Kentucky, Willis Reid Berry married Gladys Pedigo on May 14, 1938.

Next Monday, the couple will celebrate 80 years of marriage that produced four children, eleven grandchildren, and seven great grandchildren. In the process of rearing their family and making a living, Willis Reid and Gladys created memories that their offspring will celebrate next week.

Reflecting on his parents’ milestone anniversary, son Kenneth Berry said, “our growing years were important in the shaping of our lives. We were raised in a loving family atmosphere. Our parents instilled in us a desire to attend church regularly, a work ethic that through example continues today, the truth that to have good neighbors you have to be a good neighbor. We enjoyed the simple things of life – visiting family and friends, playing kick the can, hide and seek, and playing rook. We learned much about nature – how to care for animals – cows, sheep, hogs, mules, cats, dogs, and chickens. We learned how to safely use farm equipment.”

Life around the Berry family home has been one rich in tradition and treasured memories. “When I think back about MaMa and Papa, I think back to them being back at their home in the country, where they were for my childhood,” grandson Nick said.

“Papa always kept me entertained with his sense of humor that is still with him. MaMa’s strong sense of companionship stretches back as far as I can remember. MaMa always took care of Papa and their lasting bond carried such an impact on me. As I think back, what stands out most is the love that they have for each other and how it has stood the test of time.”

“Some of my favorite memories with MaMa and Papa actually involve hard work,” Micah, another grandchild, recalled. “I would help MaMa clean house, helped prepare lunch for tobacco workers. I worked in the tobacco pulling plants, picking up leaves, driving the tractor, and I’ll never forget stripping tobacco! They both taught me the value of hard work and I love them for their great example and their commitment to each other for a lifetime.”

Recalling her formative years, daughter Runell Berry Houchen, said “Mama spent a lot of time on me, with me, and for me. Wore out her straight chairs when I was a baby and had a colic. Made my clothes for many years – and she was a great seamstress. Took me to piano lessons and waited for me, took me to 4-H and helped with sewing projects. Set an example of going to church as a top priority in her life.”

Faith has been a hallmark of Gladys and Willis Reid’s lives and one passed on to each succeeding generation. Michael Berry, one of the couple’s children, recalled, “When they go to bed at night, Daddy always prays asking the Lord’s blessing for his family.”

Great granddaughter Jamie Houchen recalled “of all the things that MaMa and PaPa have stood for, the one I’ve respected the most has been their steadfast and deep love for our church, Pleasant Point Missionary Baptist Church.”

Grandson Drew said one of his best memories of his family is growing up in and around the church. “It’s meant a lot throughout the years.”

In the Berry family, food is a continuous theme that is woven through 80 years of memories.

“MaMa’s world-famous gravy and biscuits were the best!” great granddaughter Jana says. “She’s the queen of homemade biscuits and gravy.”

Granddaughter Tambra recalled “a special gift from MaMa and Papa was when Karen, Jana, and I had sleepovers with them. I remember the taste of cream from cow’s milk, homemade biscuits and gravy for breakfast.” Those memories brought to Kenneth’s mind how he “enjoyed waking up to the fresh smell of breakfast drifting through the house and then going down to a warm wood-burning stove.”

Tambra also had vivid memories of the process of killing hogs which included “holding pig parts in my hand, stuffing sausage sacks, and eating crackins.” Jana chimed in with her memories of rendering lard. “We had to cut up the fat, put it in a big black kettle over a fire and use a big, long lard paddle to keep it stirred until it was just right.”

For other grandchildren and great grandchildren, time spent at the Berry farm created memories of listening to “Lum & Abner,” watching “HeeHaw” while shelling beans, swinging and climbing trees, playing kick the can, and lots of fishing expeditions.
Contemplating the 80-year story of the family his parents created, Kenneth Berry concluded, “God has blessed us in so many ways through our life and we are so thankful.” 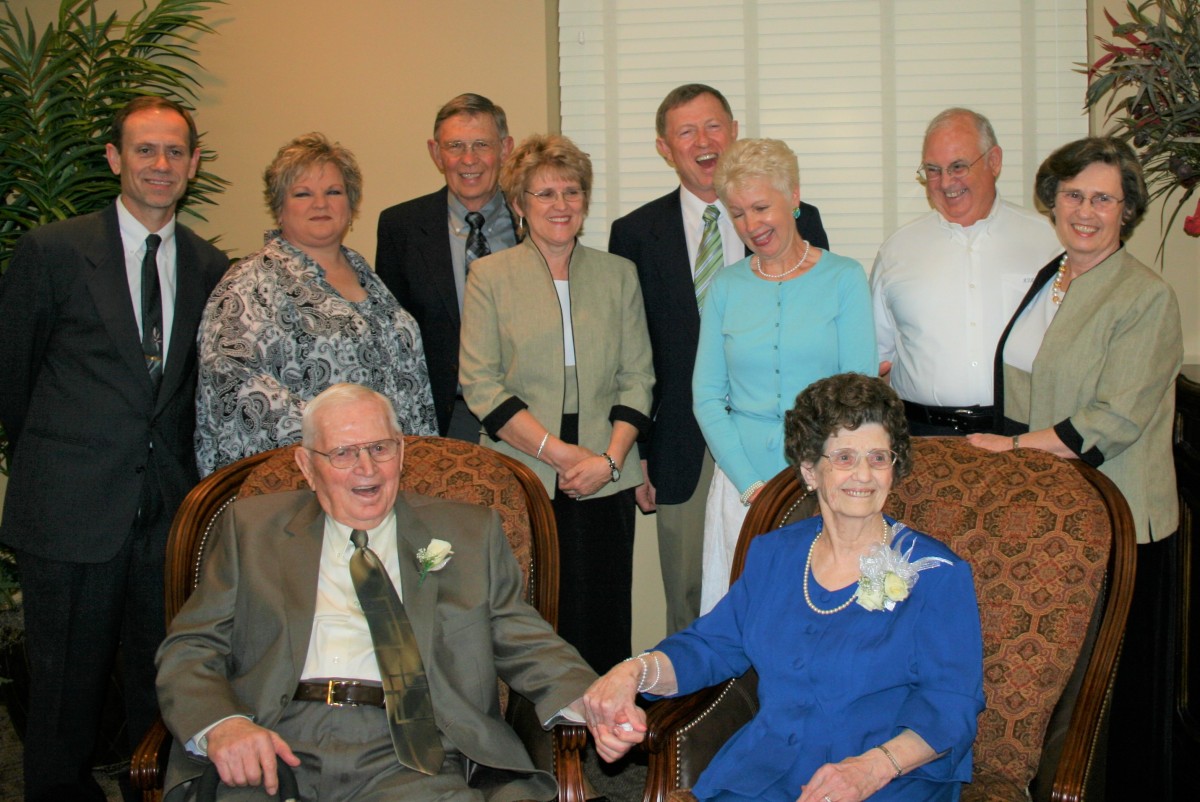 WILLIS REID & GLADYS BERRY, seated, and their children and their spouses gathered for their 70th anniversary a decade ago. Standing from left to right – Michael Berry and wife Pam, Charles Reid Berry and wife Charlotte, Kenneth Berry and wife Linda, Runell Berry Houchen and husband Don. The family will celebrate Willis Reid and Gladys’ 80th wedding anniversary on May 14.