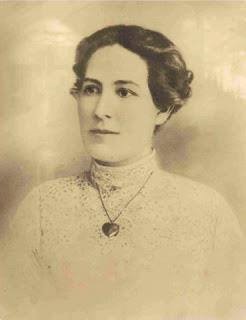 People everywhere will be observing Mother’s Day on Sunday and a West Virginia woman will be lauded as the creator of the holiday while the Kentucky woman who was the true author and originator of the idea will be forgotten. Few Kentuckians will recall that our day of honor for mothers was born in Henderson, Kentucky.

Mary (“Mamie”) Towles Sasseen, a school teacher and principal at the Center Street School in Henderson, was the first promote the idea when she organized a Mother’s Day celebration in her school in 1887.

Convinced her idea was valid, Mamie published a booklet entitled “Mother’s Day Celebration” in 1893. In her booklet, Mamie explained that she realized how much influence a person can have on a child and concluded “that by celebrating Mother’s Day once a year, much of the veneration, love and respect due to parents might, by song, verse and story, be inculcated in the next generation.” Her idea was to observe Mother’s Day with programs honoring mothers in schools all across America. With no particular date in mind, Mamie selected April 20 which was her own mother’s birthday.

More specifically, Mamie thought student recitations about mothers and motherhood would be ideally paired with songs about home. She wrote, “home as the magic circle within which the weary spirit finds refuge; the sacred asylum to which the care-worn heart retreats to find rest. Home! That name touches every fiber of the soul. Nothing but death can break its spell, and dearer than home is the mother who presides over it.”

It was Mamie’s feeling that “every man and woman, whom the world has called ‘great,’ whose words have been treasured for their wisdom and goodness, all cherished their memories of mother, of happy, innocent childhood and of home.” She added that her hope was “awakening on the part of the child, a deeper appreciation of her, who is the central figure of the home. That it may strengthen the family bonds, making them more beautiful and tender, that I may breathe a hope of that future where language is music, thought it light, and love is law.”

Traveling extensively to educational meetings, Mamie led the effort to establish Mother’s Day. By 1894, she had convinced the public schools of Springfield, Ohio to join her Henderson County observance.

A dedicated educator, Mamie ran for Kentucky Superintendent of Public Instruction in 1899. During the campaign, newspapers mentioned her push for Mother’s Day and her victorious opponent even credited her with being the “author and originator” of the idea.

In 1904, Mamie married Judge William Marshall Wilson and moved to Florida. In a cruel twist of fate, the woman who worked to create Mother’s Day died in childbirth on April 18, 1906.

The following year, 1907, Anna Jarvis of West Virginia began her work to establish the holiday which she did by creating “Mother’s Day International, Inc.” and she trademarked the phrase “second Sunday of May” and “Mother’s Day” which must “be a singular possessive, for each family to honor their mother, not a plural possessive commemorating all mothers in the world.”

Jarvis’ work occurred 14 years after Mamie Towles Sasseen Wilson published her booklet and began her movement for Mother’s Day. Twenty-one years after Mamie launched her project, Congress approved a resolution and President Woodrow Wilson signed a proclamation declaring the second Sunday of May as a national holiday known as Mother’s Day.

One of the few places you’ll find mention of the originator of Mother’s Day is on Historical Marker #191 in Henderson.

Sam Terry’s My Kentucky column appears weekly in Jobe Publishing newspapers in celebration of the 225th anniversary of Kentucky statehood.  Past columns can be accessed by visiting www.jpinews.com